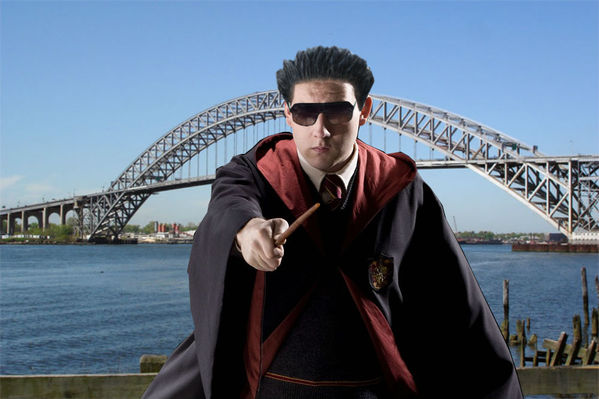 January 23, 2015 – Speaking to a packed house at the Kodak Theater in Los Angeles as part of her book tour for The Casual Vacancy, celebrated Harry Potter author JK Rowling fielded a question Friday morning regarding whether any Americans attended the Hogwarts School of Witchcraft and Wizardry. Rowling then revealed, to the shock of attendees, that popular Gryffindor character Neville Longbottom was, in fact, a guido from the city of Bayonne, New Jersey the whole time.

Neville, whose real name is Nuncio Lombardi, is of course remembered as the bumbling, timid school chum who grew up to lead the Hogwarts rebellion against Voldemort and his army of Death Eaters, ultimately slaying Nagini, the final Horcrux, with Godric Gryffindor's sword.

What was merely implied about Neville, according to Rowling, is that before emigrating to London, his family lived in Hudson County by the bay, and he spent his early days tanning, lifting weights, and sneaking into over 21 clubs with the help of his older brother Fabrice.

“It was always my intention to prominently feature a young wizard with a rugged, albeit self-indulgent American background, and Neville seemed like the obvious choice,” Rowling said. “He struggled to fit in, struggled with the magic despite his ostensibly pure-blooded background, there was that whole chapter about trying to levitate his tinted Mustang... frankly, I'm surprised nobody picked up on this.”

She went on to inform the stunned crowd that, in her eyes, the trauma of leaving his childhood home, combined with the culture shock that drove his parents insane, led to Neville becoming depressed, sheepish, and forgoing his regular exercise regiment. By the same token, however, it was his peak physical transformation and brash, illogical American confidence that allowed Neville to stand up in defiance of Voldemort in the final chapter.

“We Brits are often too cynical, too beholden to class and our lot in life, to affect any kind of meaningful rebellion. Sometimes you need that effective cocktail of American ego and lunacy to bring about change, which is what made Neville the Gryffindor Guido such a favorite among readers.”

The revelation met with some immediate criticism, in particular from America's Natural Tan Coalition, who wrote on their Facebook page that “Rowling should think twice before providing as an afterthought such a shameless endorsement of a tracksuit-wearing, carrot-colored minority of Americans of whom we are all ashamed.”

“It is disappointing to be forced to remind readers that the Harry Potter series was, at its core, about tolerance,” Rowling said in response to some audience derision. “The cast of characters spanned all wonderful walks of life, including pure-blood, half-blood, black, gay, dwarf, and Irish, in that order. American characters are equally deserving of our fascination, even ones who repeatedly and annoyingly refer to their 'Azkaban abs' in book six.”

When pressed to reveal more titillating details about her previous work, Rowling said she would rather focus on her new series, but that she'd heard an interesting rumor that all house-elves sport both male and female genitalia.