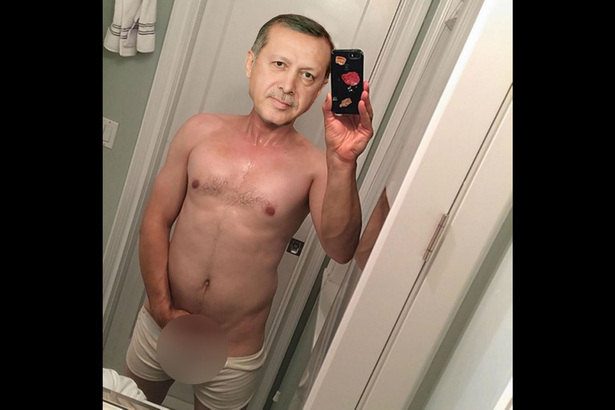 September 3, 2014 – In a massive violation of privacy, and possibly international law, an anonymous hacker broke into the cloud database and posted onto Twitter several nude photos of Turkey's first directly elected president, Recep Tayyip Erdoğan. The socially conservative former prime minister was seen in a variety of explicit poses, in some cases taking shirtless mirror selfies, while in others stretched bare on his bed at Çankaya Presidential Palace while being photographed, possibly by longtime political ally Ahmet Davutoğlu.

“We are outraged that Apple's privacy software did nothing to prevent this breach, and that Twitter users are shamelessly retweeting the selfies with so little regard for the president's image,” a spokesperson for the administration told the international press. “Mr. Erdoğan has feelings, dignity, and an iron-fisted approach to his nation's law enforcement and media. But instead of asking for reform, he's now being asked for more hot pics of his chest and buttocks. It's a sad state of affairs.”

President Erdoğan, who rose to prominence and power in a traditionally secular nation where the military held greatest sway, was already a controversial figure due to his religious leanings and last year's high-profile corruption investigations. Now his supporters in the Justice and Development Party fear that whatever goodwill was gained through boosting Turkey's economy in the region will be undone by these salacious photos, which were only intended to be seen by his wife Emine, as well as Hungarian Prime Minister Viktor Orbán.

“The easy acquisition of these images speaks to the new president's recklessness,” said opposition chairman Kemal Kiliçdaroğlu, who walked out of Erdoğan's inauguration ceremony in protest. “Everybody knows that the cloud isn't actually secure. If you want to be sending out sexy selfies, you need to buy a polaroid camera and mail them like the rest of us.

“This is the man who wants to transform Turkey's executive power structure? Please,” he continued. “His balls aren't even symmetrical.”

Some bloggers and political allies have chided Kiliçdaroğlu and others for slut-shaming and victim-blaming, saying that the president should feel free to express himself without fear of privacy invasion or objectification, just as he feels free to occasionally purge Turkish police departments of dissenters.

Others maintain that this Twitter trending is simply the unfortunate by-product of an online community obsessed with international relations. Americans in particular, exercising an unhealthy obsession with foreign affairs, have been retweeting the raunchiest full frontal images faster than Twitter can ban accounts.

“We are very disappointed with our political opponents and the international community for their blatant disrespect,” Erdoğan's spokesperson went on. “Rather than focus on the president's many achievements in Turkey and against regional terrorism, people want to focus in on his magnificent dong.

When asked about the selfie hack late Wednesday, Erdoğan himself expressed a sense of humor about the incident, joking that he could always shut down Twitter again if he felt like it.