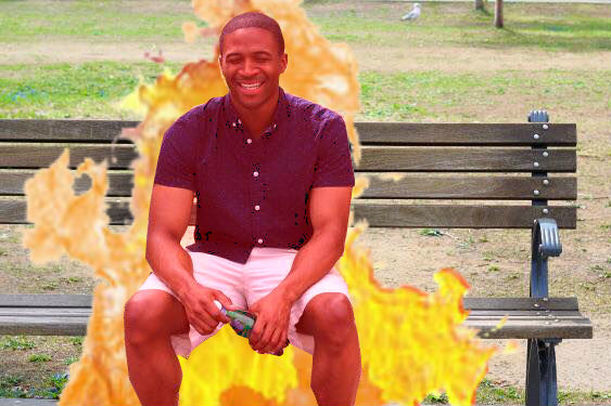 August 12, 2016 – In the midst of a powerful heatwave that is keeping residents indoors and putting a serious strain on daily commutes, Greenwich Village resident, and man who just spontaneously combusted, Chad Rollins wants to throw some cold water on his fellow New Yorkers' complaints by reminding everyone that it could be hotter.

Hey, I'm from Albuquerque, and hoo boy, did we have some steamy summer days down there,” the man whose entire body just recently became engulfed in flames told the press. “I know some of my more fair-skinned New York buddies might not be used to the heat, but I gotta keep tellin' em, this ain't so bad.”

The unwavering contrarian whose internal chemistry had somehow reacted with the sun's rays to cause an entirely localized explosive conflagration went on to say that New Yorkers should not be dissuaded from jogging or lounging in the park, and that beating the heat is simple a matter of hydration, sunscreen, and willpower.

“I never go anywhere without my trusty water bottle,” said Rollins as his clothing started to deteriorate and the flames emanating from his body began to spread to the park bench he was sitting on. “Don't get suckered by sugary drinks like Gatorade, they'll just make you more thirsty. Nothing beats good old-fashioned H2O.

“I guess you could say I'm more a fan of summer than of winter,” Rollins said to the only reporter left who hadn't run off to find a fire extinguisher. “I can't stand the cold. Winter here in New York really makes me miss New Mexico.”

Many news outlets sought to conduct a follow-up interview with a frequent sunbather in Central Park, but arrived only to find a pile of ash on top of a beach towel.