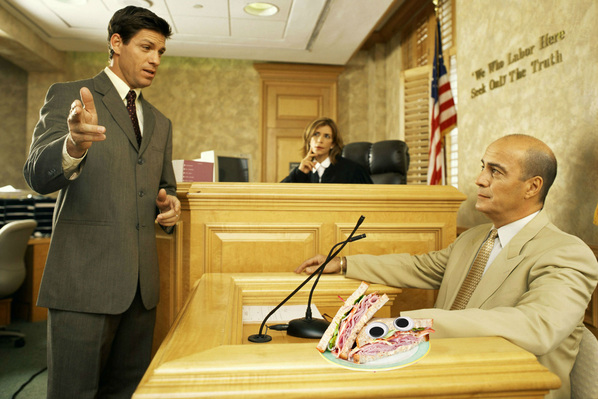 November 25, 2014 – Despite statistical analysis pointing to an indictment, a grand jury in Key West, Florida has declined to file criminal charges against an artisanal ham sandwich that, according to a police report and several eyewitnesses, shot and killed an unarmed black man last August. Legal experts were quick to point out that, were it not for the sandwich's cozy relationship with local law enforcement, it would have almost certainly gone to trial.

“Judge Sol Wachtler famously stated that a prosecutor could persuade a grand jury to 'indict a ham sandwich,'” wrote Key West Citizen crime reporter Jimbo Shunks. “This case would seem to contradict that statement, but it must be kept in mind that this particular sandwich, a deli item from Cole's Peace Restaurant, is a long-time member of the neighborhood watch and a favorite of local police.”

In cases where a police officer is under investigation, grand juries seem far more reluctant to pursue charges that could potentially lead to any kind of meaningful consequences. The same can be said of neighborhood watch defendants, and most any case where an armed man, or a ham & gruyere sandwich on sourdough with spicy chipotle sauce, guns down an unarmed black civilian.

“Key West cops are frequent customers of Cole's Peace, and the 'Sammie's Mom' is their most popular menu item,” Shunks went on. “It's fair to say that the savory entrée might receive some leeway from law enforcement in terms of an investigation, and it may have known this going into its armed altercation with Mr. Carver.”

The death of the victim, 23-year-old Jeremy Carver, sparked protests and riots nationwide back in August, and this jury decision seems to have sparked a second wave. According to the police report, several eyewitnesses saw Carver approaching the chef's special with a hungry look in his eyes, but most say he turned and walked away before the sandwich opened fire.

“Jeremy saw that the sandwich had tomato, which was always kind of a dealbreaker for him,” said Carver friend and eyewitness to the shooting Marcus Cole. “There's no way it could have felt threatened by him at that distance, especially since only one of them was armed. But it just started firing anyway.”

“This is just another tragic incident of 'the other white meat' benefiting from a system that favors inanimate edible objects over black lives,” local reverend George Freemont said at a rally in downtown Key West. “I urge calm and orderly conduct for those protesting in the streets, and I also encourage action beyond marching. I say we boycott sliced ham, as well as pastrami, roast beef, and chicken salad. As far as I'm concerned, all deli meats must be held accountable.”

The National Bar Association will be attempting to press federal charges on the handcrafted ham & swiss over the next couple of months, but legal experts theorize that it will likely be eaten by then. In the meantime, its gun has been returned, and it will be able to walk the streets a free sandwich.