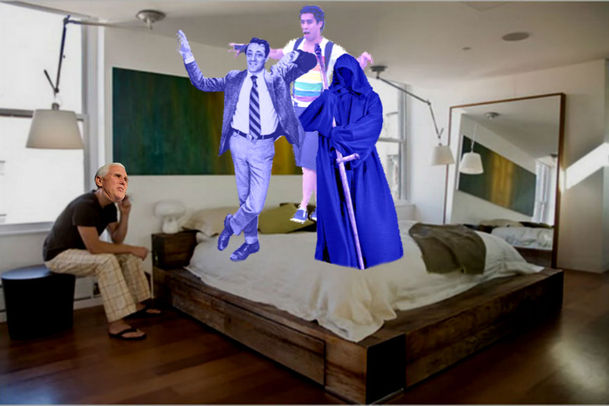 March 30, 2015 – Despite standing firm against civil rights groups, threats to state business, and wide media criticism, Indiana Governor Mike Pence has officially rescinded his support of Senate Enrolled Act 101, the Religious Freedom Restoration Act, after an eye-opening spiritual journey guided by the “ Ghosts of Gay Pride,” an event he insists was strictly platonic.

“I still wholly support religious freedom, and the right for businesses to operate according to Biblical principles,” Pence declared at a morning press conference on Tuesday. “That being said, these three fancy spirits showed me that enshrining discrimination in state law was a step too far. 'Twas a whimsical affair I shall not soon forget.”

First, Pence reports, as he began to nod off to sleep, he was visited by the Ghost of Gay Pride Past, '70s activist and politician Harvey Milk. Together they dreamed of a time just decades ago, when similar efforts by anti-gay and religious leaders were quashed by the enduring human spirit.

“From the Stonewall riots to the AIDS epidemic, I witnessed the profound struggles of the American gay community, and realized that I now stand firmly on the opposite end of that struggle,” Pence explained. “I've always attempted to model myself after the great Ronald Reagan, but Harvey showed me how that's not always a good thing.”

Next, the Ghost of Gay Pride Present took Governor Mike by the hand, and led him to a bustling section of Circle City, where rainbow flags flew high, and gays and lesbians of all shapes and sizes danced like there was no tomorrow.

“The second ghost, who incidentally was named Jeff, showed me that there is no shame in being who you are and loving who you want,” Pence said. “When you come to understand that you were born this way, there is only overwhelming pride, and rainbows, and copious eyeliner.

“Sorry,” he continued, rubbing his temple. “I may still be tripping on something.”

Finally, the Governor began to explain his journey with the Ghost of Gay Pride Future, which had him notably shaken. Apparently, the spirit's vision of Pence's gubernatorial legacy was a sight too terrible for mortal minds to conceive.

“The third ghost, who incidentally was named Balthazar the Merciless, showed me an Indiana crippled by boycotts, abandoned by the rest of the civilized nation to wallow in our own hatred. Hoosiers cursed my name under their breath, and spoke of me as one of Indiana's greatest human atrocities. Worse than Dan Quayle and Axl Rose put together!”

Pence told reporters that, upon waking from this nightmare in a cold sweat, he flung open the windows of the Governor's mansion to reveal that his state was still standing, in its usual unremarkable fashion, and that there was still time to set things right.

“I'd like to thank Supervisor Milk, Jeff, and Balthazar the Merciless for their wisdom and guidance,” Pence said smiling, lifting Tiny Gay Tim off of his crutch and up on his shoulder. “If they ever wish to visit Indiana once more, they are welcome in my bedroom anytime. I could probably use more advice on revitalizing our manufacturing sector, should they wish to throw any my way.”