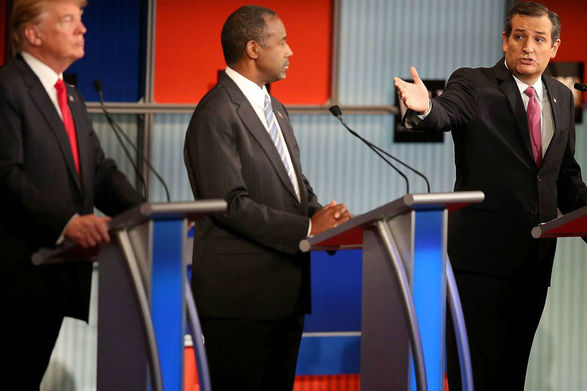 Photo courtesy of Vox and CNN
by Dwayne Capyberra


December 15, 2015 - With the next major Republican debate taking place tonight in Las Vegas, we here at the Moonmont Chronicles are offering the following predictions regarding the political attacks many of the candidates should expect, as well as their potential rebuttals:


Attack: Disagree with Trump's bananas idea to ban Muslims from the land of religious tolerance.

Rebuttal: Either call the accuser an ISIS sleeper agent based on a non-existent report, or agree that the idea is crazy but it also "feels" right.


Attack: Accuse fellow candidate's thoughts and prayers after San Bernadino of being less effective than yours.

Rebuttal: Counter by revealing that thoughts and prayers were offered while buying an M-16 to kill terrorists.


Attack: Fellow candidate was once in the same room as Obama.

Rebuttal: Only in room to give Obama the stank eye and crop dust him.

Rebuttal: Agree to match and insist on doing it left-handed (secretly the stronger arm).


Attack: Accuse other candidates of not being American enough.

Rebuttal: Say “nu-uh” but also at the same time find a way to prove their point.


Attack: Show photos of candidate going to the screening of a foreign film with subtitles.

Rebuttal: Claim to have been tricked by the English title, then use it as an example of "stealthy" immigrant behavior.


Attack: Call out the front-runner for being an intolerant, racist, misogynistic, self-serving asshat that is ruining his party's reputation and bringing out the absolute worst elements of bat-shit crazy Americans.

Rebuttal: Call the accuser a loser and drop the fucking mike.