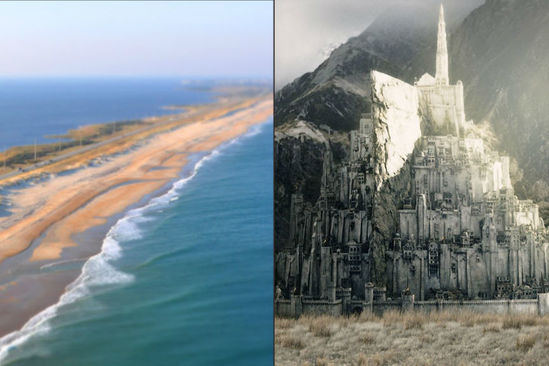 March 29, 2016 – After the North Carolina legislature passed a law which undoes and outright bans all non-discrimination ordinance for the LGBTQ community, businesses and neighboring state governments have kicked into action by pulling business out of NC and preventing further travel to it. Among those protesting the discrimination is the Middle Earth realm of Gondor, which has recently announced a full withdrawal of non-essential travel to North Carolina by way of mounted eagle.

“Following our defeat of Sauron, we seek to make Middle Earth a more peaceful, enlightened, and welcoming place,” quoth King Elessar aka Aragorn II, son of Arathorn, from atop his throne in Gondor's capital city of Minas Tirith. “As the first High King of the Reunited Kingdom, I intend to practice what I preach, and that begins with no longer visiting North Carolina's beautiful Outer Banks and arboretums.”

King Elessar, flanked by his elven wife Arwen and fellowship buddies Legolas and Gimli, admitted that he'd struggled with the philosophy of non-discrimination legislation, in that true equality should not require unique protection in a perfect society. However, when told that transgender North Carolinians would be required to use the bathrooms of the gender they were assigned at birth, he ordered his men to light the warning beacons of the White Mountains, so that he might make an executive order and hold a press conference.

“With a heavy heart, I decree that no eagle carrying an emissary of Gondor shall set talons down in Raleigh-Durham International Airport until this religiously-motivated law is banished from existence!” Elessar's decree was met with raucous cheers from attending elves, dwarves and hobbits, and muttered curses from assimilated orcs.

“I already know Gandalf the White's not gonna be happy,” Aragorn told reporters following his decree. “He and I usually like to sun ourselves on the beaches of Cape Hatteras over the summer. Guess he'll have to find another way to work up a tan. That dude gets pale like you wouldn't believe.”

The announcement from Minas Tirith has met with some backlash from neighboring regions, including the more traditional rural communities of Rohan to the north.

“If you ask me, this decree is just more political theatre from the left-wing Stewards of Gondor,” said Jimbo the Half-Witted, proud man of the Rohirrim. “I can't imagine why they were sending state-funded eagles to the United States to begin with, much less North Carolina, wherever those are.

“I say the so-called King ought to focus on the issues we're facing here on this continent. Like the 'scouring' out west at that there shire that nobody seems to want to talk about.”

When asked how they thought the travel ban would impact the state's economy, North Carolinian officials said they would happily trade a fortune in mithril and dragon's gold for the chance to treat their own citizens in a manner more befitting of a medieval society.