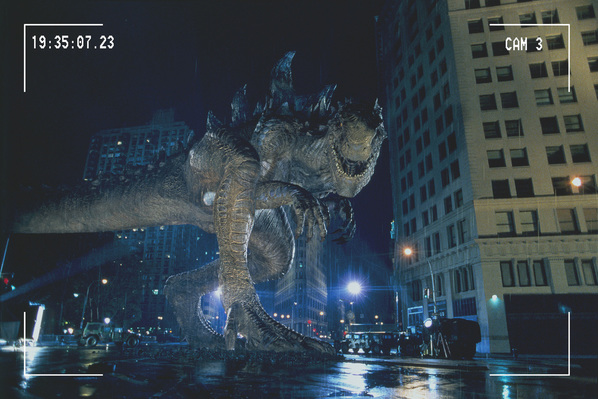 September 15, 2015 – Sources have confirmed that, over the weekend, legendary kaiju monster and regular Times Square patron Godzilla was brutally assaulted by military forces on 44th Street, despite the fact that, as he later told reporters, he was only visiting to catch a Broadway show, and possibly do a little shopping on the side.

At approximately 7:15 PM on Saturday, the ancient marine iguana was seen passing by the Toys R Us in Times Square on his way to the theater. Onlookers say he wasn't causing havoc or generally bothering anyone, that he was in fact smiling and looking at his phone, though several costumed mascots reportedly made complaints that his tail was getting in the way of their business.

“I was on my way to see the last performance of Hedwig and the Angry Inch,” Godzilla later told NY1. “When I heard they were closing early, I knew I had to catch it. As a Rent fan, I was particularly excited to see Taye Diggs in the role, though I'm sad I missed out on John Cameron Mitchell due to prior engagements in Tokyo.”

Then around 7:35, acting on a concerned call from an anonymous citizen, the U.S. Military deployed infantry, tanks and helicopters to drive the visiting beast back into the Atlantic. The ensuing conflict, leaving a trail of destruction from midtown all the way to South Street Seaport, will reportedly cost the city 75 million dollars, and totally ruined Godzilla's night.

“I swear, I wasn't acting in any way suspicious, and in fact, I'd made every possible preparation to blend in with the other tourists. I'd even called ahead to my friend Mothra to meet me at the show so we could head to the Olive Garden for post-show drinks and breadsticks. Instead, I was forced to return to the dome-shaped rock formation on the ocean floor from whence I came, and I had to hear all the show details from Mothra secondhand. Well, best-laid plans, I guess.” 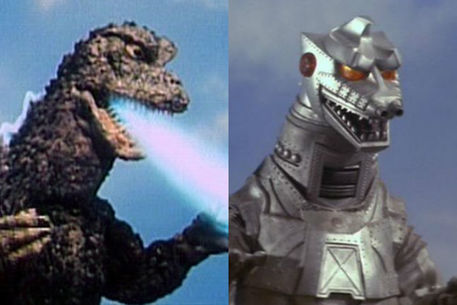 Worse yet, investigators now suspect that this may have been a textbook case of mistaken identity. When questioned by the press, the source behind the anonymous tip claims they actually witnessed Mechagodzilla heading in a different direction, a robotic creature long suspected of perpetrating large-scale bank fraud using his digitally networked brain.

“We acted in good faith on the tip we were given, and mistakes were made,” admitted acting sergeant Hiram Bobbity. “When put next to each other, I think you can see how one could be mistaken for the other. I personally don't see this as a use of excessive military force, but rather a cautious and well-trained approach to a situation which, if handled instead with diplomacy, could have cost billions instead of millions of dollars.”

“Look, I don't want to go playing the ancient reptilian race card here,” Godzilla said in response to Sergeant Bobbity's comments. “Obviously there's a difference between the steel and the scale, but more importantly, I know Mecha-G. He's a good buddy, and I'd be shocked if he was actually responsible for what they claim.

“At the end of the day, if our takeaway from this is supposed to be that anyone who's minding their own business can be shot by bazookas and net cannons and experimental laser tech by an overly aggressive military, it's going to make people like me think twice about visiting New York again in the future.”