God's 11th Amendment to the 10 Commandments, “Thou Shalt Not Glorify Weapons of Death,” Voted Down by Angel Senate 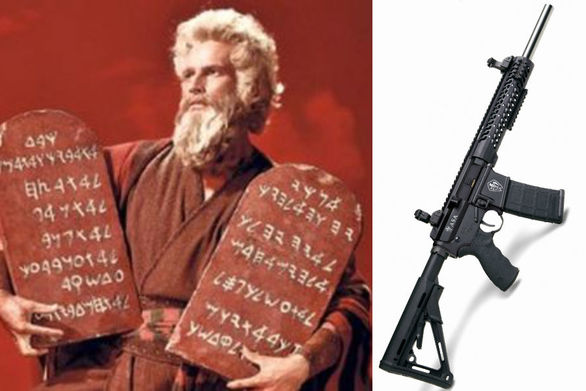 June 13, 2016 – Almighty God, Creator of all things, has suffered another political setback at the hands of Heaven's legislative body, who on Monday voted down a bill to install an 11th Commandment to the original 10, “Thou Shalt Not Glorify Weapons of Death,” an amendment which had long been stuck in committee.

“I guess I'd just figured that, after 3000 years, the angels would have become a little more progressive,” a weary God told reporters from His seat atop the Universe. “Instead, it seems as if a lot of them, like many of My creation, think modern military weapons are super cool, and should be available to literally everybody. I don't get it, man.”

Many Heavenly pundits had posited at the dawn of time that, when God was elected to give birth to humanity and all that surrounds them, He would maintain a strong hand on the wheel, and would not allow opponents in Celestial Congress to obstruct His growing vision of how humanity can best govern themselves. Instead, this Congress has succeeded in blocking any legislation sponsored by God since the days of Abraham, most notably this Commandment decrying deadly firearms.

“If you ask me, I think half of these Senate angels are on the take from the NRA,” God posited. “Man, I can't believe I created those asshats. That Wayne LaPierre guy makes Lucifer look like Gabriel.”

God also expressed dismay that Heaven's afterlife constituents, particularly those victimized by gun violence, have not managed to organize any meaningful push for the 11th Commandment by holding their district's angels accountable. He attributes this in part to those affected being from such diverse backgrounds, religious or otherwise, and thus struggling to come together under one clear message.

“This amendment just seems like such a no-brainer for anyone, especially with respect to our troubled modern times. And since it'd be a religious Commandment thing, written on a really old rock, people would have to listen. Ah well, maybe next millennium.”

Many in Heavenly politics have suggested that this level of Senate obstruction stems from the fact that God is the Universe's first deity of color, and they don't expect anything to get easier during the next Creation cycle when a woman takes over.