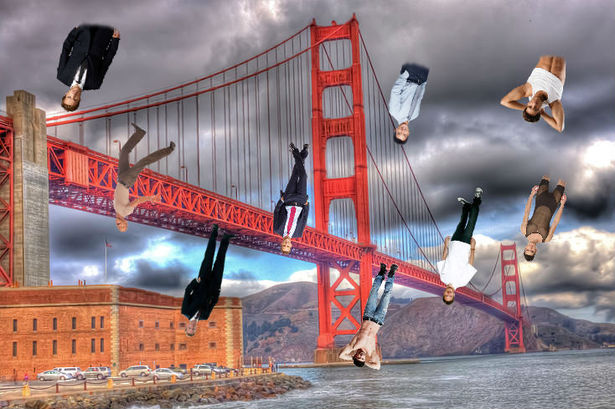 October 14, 2014 – With the majority of Americans now supporting marriage equality, and legal challenges brought against gay marriage bans in all remaining US states, The Lord Almighty has finally seen fit to unleash His holy wrath, as forewarned by scripture. As of 9 AM on Tuesday, great stormclouds have formed over the city of San Francisco, California, and from them has poured a veritable monsoon of hot men, a just punishment for the wicked and sinful.

San Francisco, the modern gay Gomorrah, has been suffering from drought along with the rest of the state. When the dark clouds gathered, Frisco residents thought perhaps that their prayers for rain had been answered. But instead of water, the clouds began raining men of all shapes, sizes, and states of undress.

“It's a real disappointment that God has ignored our calls for help, but I suppose we have no one to blame but ourselves,” said Cameron Mayfield of Castro Street, with a freshly fallen stud under each arm. “We'll simply have to take His punishment in stride.

“After all, when life gives you lemons, make hot, sweaty lemonade,” he added, before being carried away by Yahweh's unholy, shirtless messengers.

Despite the warnings of family values organizations, who specifically foretold of dark, gay stormclouds, gay marriage is now legal in 27 damned states. Even the Vatican wrote Monday that homosexuals “need to be welcomed and accompanied with patience and delicacy,” further revealing how out of touch Pope Francis is with the modern, vengeful God who seeks to bury all sinners in a deluge of well-toned abs and tender bear cuddling.

“Theologically speaking, this is akin to when your father catches you smoking a cigarette and forces you to smoke the entire pack,” said Pastor Terry Brisbane of Cornerstone Church. “Rather than seek his forgiveness, we must embrace this heavenly punishment with open, sleeveless arms, as Gob embraced his.

“As they say, God works in mysterious, ruggedly handsome ways, and I am merely his disciple,” he concluded before throwing off his robe and wading into the wrathful plague of mimosas and heavy petting outside.

As the clouds spread further out over our doomed nation, gays as well as lesbians are being called on to do their part for salvation through impassioned repentance, or as the scripture calls it, 'scissoring.'