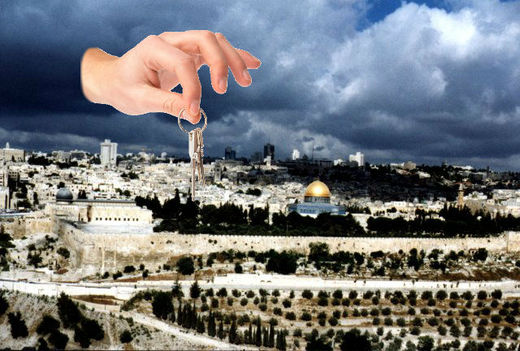 July 16, 2014 – In an unanticipated but blessed spectacle of divine rummaging, the hand of God appeared above Jerusalem early Wednesday and began frantically lifting up rooftops and digging in alleyways. Seemingly uninterested in idle chitchat, the booming voice of the Lord explained that He just wanted to grab His keys and be on His holy way.

“I've been retracing my steps for millennia, and if they're not here then I just friggin' give up,” bellowed His Mightiness, as stunned Israeli citizens watched him poke around inside the Dome of the Rock. “It would really suck to have to replace them, it's the keys to like all my stuff on there.”

As The Almighty fumbled around the Church of the Holy Sepulchre, onlookers began asking if He might consider taking a break from His search to answer some important questions about whose faith best captured His vision of humanity, and who should lay claim to the holy land, in His divine opinion.

“Look, I don't really wanna get into that right now,” God replied, sounding cross. “I thought I was pretty clear about all that stuff during my last visits, and if you all can't sort it out now, that's not my problem.

“I just gotta find these god damn keys, otherwise I'll have to break into the garage to dig out my son's old college stuff. He won't quit bothering me about it. Kids, am I right?”

Rabbis, priests and imams who had heard the news quickly gathered around Hurva Synagogue, where the Creator was beginning to rather frantically knock things over. The leaders affirmed humanity's desire to hear God's wisdom regarding contemporary matters of religious and ethnic strife, particularly in the Middle East, that children and innocents might be spared further displacement and bloodshed.

“Look, I'll cut you a deal,” Lord of the Heavens replied. “You help me look for the keys, I'll throw you some pointers on how to deal with stuff. But brace yourselves, cuz it's all gonna sound pretty familiar. Couple of 'Thou shalt nots' you all seem so keen to overlook. Easiest shit in the world.”

As His dejected followers began rummaging about, a thunderous cry of “Found them!” shook the very foundation of the city, for His Mightiness had discovered the keys behind a bench at the Bible Lands Museum.

“Man, that's a relief,” God sighed. “Look, I know I said I'd help out, but since I'm the one who found the keys, I think it'd be fair if I bounced. But hey, don't worry, I'll come back real soon to sort this all out, Dr. Phil style. For realsies.”

As quick as a bolt of lightning, God's hallowed hand disappeared into the sky, which soon became filled with short-range missiles and fighter craft.