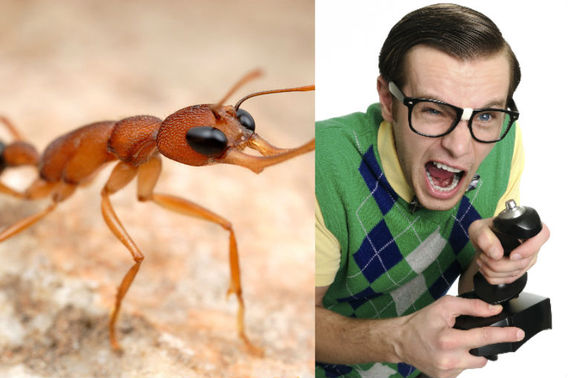 October 24, 2014 – The insect world has been rocked by controversy over the last two months, due to a trending hashtag which has forever associated the industrious and reproductively viable gamergate ant with a vocal group of angry, hostile, adolescent little shits known as #Gamergaters. As women in the gaming community continue to be harassed online, receive rape and death threats, and have their personal information exposed, this lower life form has sought to distance itself from the lowest life form with which it has become unwittingly entangled.

“I'm pretty used to waking up and seeing weird stuff on the internet,” gamergate ant Teresa Hamlisch, 7, told reporters. “But logging in to find out that a herd of faceless, miserable cyber-wads have co-opted your species' caste designation? That takes the cake.

“And the worst aspect of it is, I have no idea what they're about!” she went on. “While I am very clearly a female worker ant who can reproduce in lieu of a colonial queen, these guys just grumble on about something called 'journalistic ethics in videogame reporting.' If half of those words made sense, I still don't think anyone would care.”

The ants argue that the mouthbreathing sub-mammals' very use of the name 'gamergate,' which means 'married worker' in Greek, is untenable, because it represents everything the #Gamergate movement is not: skilled, productive, as well as social, sexually progressive, and indispensable to the community. A petition has thus begun circulating on Change.org to have the hashtag removed.

“The same kind of thing happened with our buddies in the World Wildlife Fund, when they had to settle with the World Wrestling Federation,” Marjorie Cohen, 11 months, told interviewers. “But at least in their case, they were only being accidentally associated with a group of sincerely entertaining bodybuilders who liven up your Monday, not a bunch of ferret-dick trolls who contribute nothing of value to society.”

Suggestions within the #Gamergate online community that their movement is dividing their opponents have also been thoroughly debunked by the female workers of the poneromorph subfamilies, who say they have, in actuality, never been closer as a colony.

“My sisters and I don't see eye-to-eye on everything,” Hamlisch admitted. “Hell, when I was the first in my family to reach maturity, I mutilated them by clipping their thoracic gemmae, greatly reducing their mating attractiveness, which I guess formed a bit of a wedge. But now we talk all the time! If anything, these unwashed, word-vomiting gutter-chimps have brought us together like never before.

“I know a lot of my friends have been terrified to speak out on this subject for fear of being doxxed,” she concluded. “So let me save you the trouble of releasing my personal details, shitstacks. I am an Amazonian Ponerinae ant with a constricted abdomen who works hard every day, and when that bitch of a queen bites it, I'll finally have it all, plus I got this here stinger. Come at me bro.”