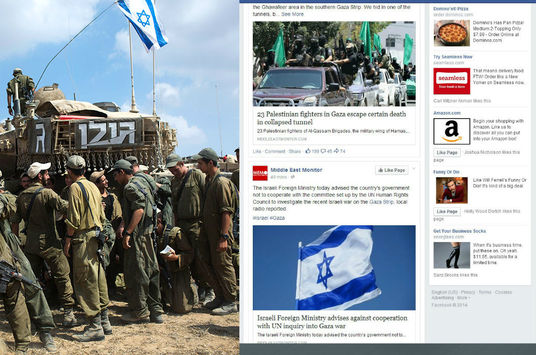 August 7, 2014 – The contentious and bloody battle that raged through Gaza may soon come to a close, as Israeli Defense Force troops redeploy to positions on the border, following major destruction of the Hamas tunnel network. After a full month of hostilities, soldiers and civilians alike are finally moving towards a full cease in combative Facebook statuses, as well as vitriolic tweets and redundant blog posts.

The social media aggression, bolstered by the international community, began with familiar but faint accusations following the murders of three Israeli and one Palestinian teenagers, with neither side Instagramming any desire for all-out war. Soon, however, tensions between former high school friends flared, and what began as a passive-aggressive “Likes” contest erupted into a full-scale trading of self-righteous blog headlines and cable news snippets.

“I support Israel all year round,” said Mindy Greenbaum, 25, from San Antonio. “But when the country's credibility is under threat like it was, I knew I had to set aside the sports updates and selfies, and start bombarding my friends with opinion pieces and quasi-historical fact. Any other nation being viciously tweeted about would do the same.

“Divisive times like these often call for even more desperate measures,” Greenbaum continued, “like referring to Fox and Breitbart as actual news.”

The aggressive exchange of ideas hit a peak in late July, when violence in the Gaza region became so brutal that many Facebookers announced a hostile “un-friending” campaign. The United Nations repeatedly called for a cease to the constant barrage of dismissive status comments and wrongly attributed photos from the conflict in Syria, but this did nothing to halt the retweeting.

“The world was only being exposed to news from one side of the conflict,” said Malik Reza, 27, from San Francisco, whose friends' news feeds are a conflagrated mess of news from both sides of the conflict. “It was up to those of us that are most aware of the truth from the side we care about to inundate our friends and co-workers with harsh images and quotes from world leaders who died before Facebook was invented.

“I am relieved to hear that we may be pulling back, though,” Reza went on. “I haven't sent a Candy Crush invite out in weeks.”

When pressed by reporters, both sides admitted that holding their own side accountable every once in a while might be beneficial for long-lasting peace, but that they couldn't have risked it in the face of continuous social media escalation. Now, with ground troops no longer in Gaza and a cease fire in place, Facebook friends say they are prepared to act like this all never happened, and post about other stuff.