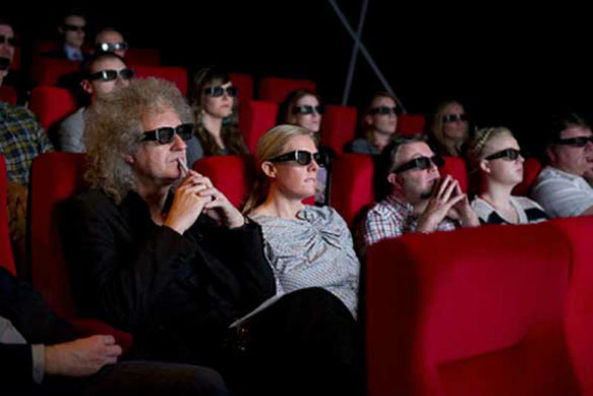 Photo courtesy of Brian May
February 13, 2015 – The movie adaptation of E.L. James' sado-masochistic romance novel Fifty Shades of Grey had its wide release today, and many female readers are skeptical of actor Jamie Dornan's ability to evoke the raw sexual potency of the book's eponymous character. Thankfully for them, special screenings of the film will provide viewers with unique specs that transform the leading man into their ultimate object of dark desire.

“Part of me wanted to see the film as it was originally shot,” said die-hard book trilogy fan Heather Snooch, “but I realized it couldn't possibly live up to inexplicably high expectations. Soon as I put on the glasses, that pasty Irishman transformed into the perfect specimen: a hairless Spaniard with bulging arms and a dancer's ass.”

Reception for both the book and the film has been decidedly mixed, but moviegoers who got to wear the colloquially titled “S&M goggles” have reported universal praise for the experience. Though each woman's perspective is different, everyone seems totally transported by the results.

“I struggled with the book due to my lack of imagination, which is admittedly what drew me to the series in the first place,” said self-styled film buff Rhonda Calhoun. “I read enough to know the film had potential, but if Christian Grey wasn't going to be played by a 7-foot-tall fully bearded lumberjack with baby-blue eyes and resolvable abandonment issues, what would be the point?

“I mean, if I'm going to fantasize about being emotionally and sexually abused, it might as well be by the man of my dreams.”

The story's premise has also met with widescale disapproval by people who don't see the fun in being taken without consent. Fans of the franchise insist that the criticism is misguided, that the narrative is actually a nuanced, non-prescriptive representation of the thing every woman everywhere secretly wants, ever.

“If those women are so uptight, maybe when they put on the glasses, they can see a lanky, emasculated schoolteacher or writer who likes to cook and be the little spoon,” scoffed housewife Brandina Wu. “But I think if they're honest with themselves, they'll see exactly what I see: Denzel Washington 25 years ago, but with Ryan Gosling's eyes and Jon Hamm's voice. Also, his mother is dead.”

While a man wearing the glasses should supposedly have seen himself right at the center of the action with Dakota Johnson, they have all reportedly told their wives and girlfriends that this is not the case.