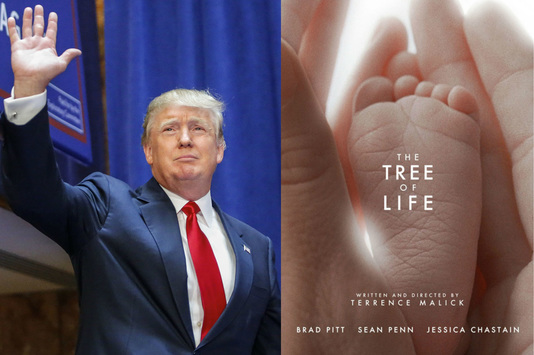 October 7, 2015 - Donald Trump is under fire this week after a recent newspaper profile revealed an uncharacteristic appreciation for high art. The profile, intended to be a shallow puff piece, asked Trump about his favorite things, including food (American pizza wrapped in bacon from Jean Georges in Trump Tower), song (The original Monday Night Football theme by Hank Williams Jr.), and celebrity crush (was Blake Lively until she was sullied with pregnancy by that Canadian illegal immigrant Ryan Reynolds).

However, the selection getting the most attention is Trump's favorite movie: 2011's Tree of Life. While beloved by film critics and film snobs, many viewers found the pensive Terrence Malick work difficult to understand, vague, and artsy fartsy. Trump supporters familiar with the film are furious.

"That's about as liberal media as you can get," said Dave Whiteman, "It stars Brad Pitt and Sean Penn, it makes no sense, and it shows dinosaurs but not the humans that lived with them!"

Supporters unfamiliar with the film refused to watch it after hearing about its extensive runtime. Gabby Fairbanks explains: "If I'm going to watch a two and a half hour movie, one of the lead characters better be named Optimus Prime."

Pundits are startled as well. "Normally candidates all pick the same movie: Field of Dreams," explained CNN contributor Taj Matthews. "Obama was considered a radical for picking The Shawshank Redemption during his 2008 campaign. But Trump choosing Tree of Life? That is beyond comprehension... much like the film itself."

Despite the backlash, Trump says the movie was a calculated choice that reinforces his image. "People know by now that I'm a political rebel and that I'll refuse to do what the party or the media expects. So why wouldn't I pick a movie most of my supporters haven't even seen?"

Trump also says that the film's message supports his worldview. "Tree of Life is really all about me. Every event in my life or choice I make could be compared to the creation of a galaxy, it's all that important... And that Jessica Chastain, what a piece of ass, huh?"

Though Trump's opponents have not commented on the controversial movie choice, the remainder of the GOP candidates each named Field of Dreams as their favorite film.