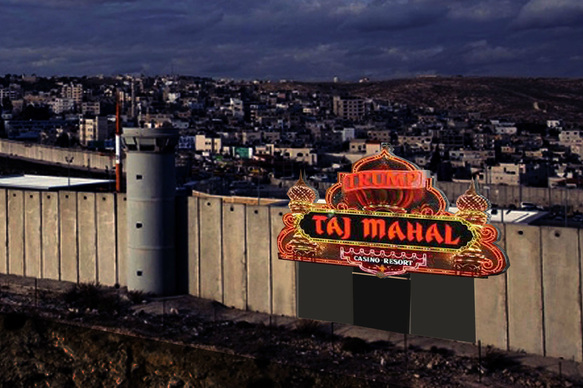 
September 8, 2015 – Earlier this week, Donald Trump released more details about his comprehensive immigration plan. In particular, he provided specifics about building a border wall that would include a series of classy entrepreneurial and gambling opportunities benefiting both the United States and Mexico.

As previously reported, President Trump would provide significant job opportunities to all kinds of Mexicans with the building of the border wall. He notes now that there will be additional construction opportunities down the line with the inclusion of high-end border casinos at appropriate intervals. These, Trump assures, would be contracted out to qualified, non-union Latinos, keeping the costs down.

“Anyone working on the wall or casino projects would be required to submit to United States documentation and sign a pledge not to emigrate,” Trump told his large gathering of reporters. “Two birds with one stone, if you know what I mean.”

The casinos would exclusively serve U.S. citizens, but Trump would have most of the non-administrative staff hired from Mexico, thus offering long-term job opportunities to our southern neighbors.

“Since the casinos will be built into the border wall, it should be pretty easy for Mexican staff to come in from the south doors while U.S. consumers enter from the north,” Trump continued. “The increased commercial opportunity at the border will help in the ongoing effort to keep an eye on possible illegal crossings.

“You get your initial construction jobs, new border security, new gaming; in other words, capitalism at its classiest! And I’m going to sponsor the first three casinos, just to make sure they don't go bankrupt.

“So vote Trump, and we'll show China that Americans also know how to build a wall!”

Other Republican presidential hopefuls were split on the merits of this plan, with several, including Bobby Jindal and Ben Carson, saying it was a good idea, while Huckabee and Santorum suggested that Christian-only wedding chapels and firearms stores would be essential additions. Bush and Rubio just shook their heads sadly.

Democrats, as usual, appear both dumbfounded and just a little pleased at Mr. Trump’s ideas.