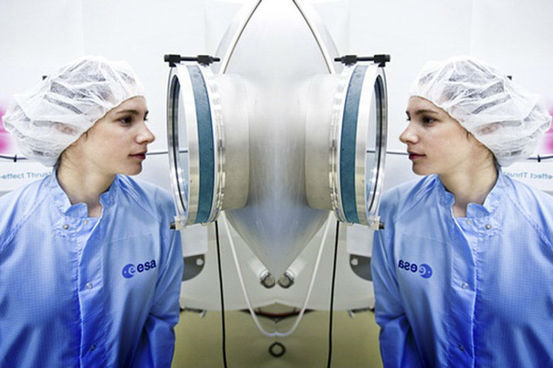 Photo courtesy of European Space Agency
August 11, 2015 – Physicists working for the European Space Agency's theoretical space-time division have made a disappointing scientific breakthrough: their lab has discovered the existence of multiple alternate realities running parallel to our own. But to the scientists' dismay, all of the parallel worlds are entirely identical.

“When the team completed construction on the wormhole portal to step into other dimensions, we were really excited to find out what sorts of alternate timelines exist in the infinite expanse of space-time,” lead researcher Roberta Button told the press. “Instead, we stepped into a lab where our alternate selves had also just completed the wormhole. No flying cars, no superheroes, and worst of all, Trump is still running for president on 'Earth 2.'”

The science team says that the space-time-faring project, involving some combination of dark matter and mirrors pointed at each other like in fancy hotels, was originally designed to teach humanity how to better themselves by example. However, funding for the project eventually came from various national militaries, with the goal of seeking out new sources of raw material to exploit and conquer. Sadly, it now seems neither objective will be met.

“I think a lot of people on the team were hopeful that their alternate selves would be way cooler,” said Button. “I know Steve had expected to find a 'Bizarro Steve' who had made billions patenting his home-brewed and personally tested sex drive tonic. Instead, it looks like on all 52 alternate Earths, we're still just a bunch of dumb scientists.

“We probably shouldn't have gotten our hopes up. After all, the only reason we were able to step into the sideways dimension is because our other selves had completed their project at the exact same time. It was nearly impossible to interact with our time-space twins because we kept stepping back and forth through the hole without considering that our alternates would do the same thing.

“Despite these disappointing results, we at the ESA plan to make the best of it,” Button concluded. “Bizarro Roberta and I promised to keep in touch in case one of us is really hung over one morning and needs to play hooky while the other steps in. Also, we have some ideas about how to totally mess with our exes' heads.”

While most of the research team is staying on with the project to maintain and research the dimensional wormhole, some in the team have reportedly given up on science, instead turning back to religion and the study of predestination.