Despite Remarks About Gunmen, Republicans Still Lead Polls Among the Dangerously Mentally Ill 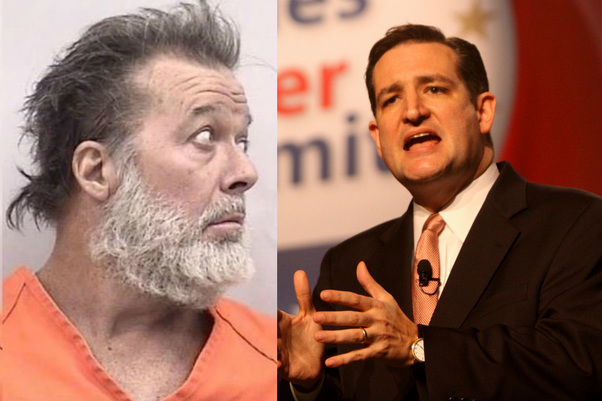 Photos courtesy of Colorado Springs Police Dept. and Gage Skidmore
December 1, 2015 – Recent public polling shows that, in spite of routinely scapegoating and belittling their community in the wake of mass shootings and domestic terrorism, Republican presidential candidates such as Donald Trump and Ted Cruz still hold sway in America among the mentally ill and the criminally insane.

Candidates such as Trump, Cruz, Ben Carson and Mike Huckabee have idly labeled notorious white Christian murderers, including the recent Planned Parenthood shooter, as products of poor mental health care, a subject they have otherwise displayed no interest in addressing. Most experts assumed this branding would alienate the psycho community, and yet according to analysis, the violent nutcase vote still swings conservative.

“I certainly don't feel that Robert Lewis Dear or Dylann Roof represent us, and I don't appreciate the comparison,” dangerously insane man Philip Howard Schlotz of Evansville, Indiana told the press. “That being said, I think Huckabee has some good ideas about the tax code, and he seems to have a pretty solid grasp on foreign policy. He or Carson definitely has my vote.”

Beyond simply offering their tacit support, mentally ill Americans have come out in droves to attend the political rallies hosted by various Republican campaigns. There they openly advocate for their key issues: trickle-down economics, more guns for everyone, Obama is an Arab, and somebody please find the source of that ringing sound.

“It has certainly never been my intention to estrange or discriminate against any good-hearted conservative Americans, of sound mind or otherwise,” Cruz said at a rally when confronted with a group of crazy constituents. “And while I still believe that men like Dear are the product of insanity, rather than dangerous rhetoric or abuse of the Second Amendment, I depend upon the rest of the dangerously demented community for their support, and I think that shows in my candidacy.

“So follow me to the White House, ye unbalanced few, ye mad and disturbed Americans, and I promise that, while you'll likely never receive medical treatment for what ails you, you will be well represented by me in the years to come!”

When asked for their thoughts, non-violent mentally challenged Americans sought to distance themselves from these proceedings, calling modern politics a superfluous exercise of image control and social media superiority, which favors sound bites and bombast over substance and elevates the instinctive and ultimately nonconstructive leanings of America's collective id. Most then asked to be left alone, please.