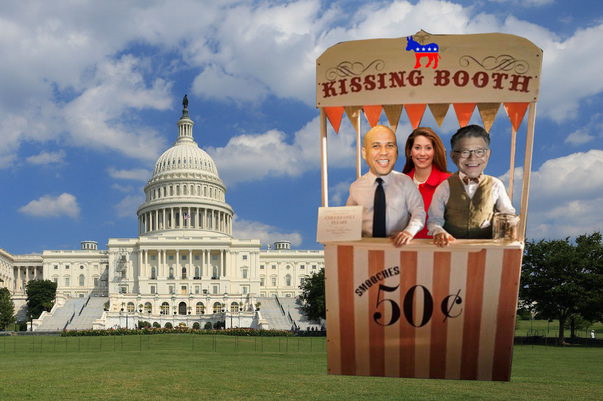 October 28, 2014 – Confessing that their celebrity fundraisers and increasingly despairing e-mail blasts simply had not sufficed to seal the deal next week, Democratic candidates for Senate opted Tuesday to erect a kissing booth on the Capitol Hill lawn. In exchange for the promise of your vote on November 4th, and just 50 cents going towards national Senate campaigns, you can now get to first base with the favored candidate of your choosing.

“It's vital to the future of this country that Democrats hold the Senate in 2015,” said New Jersey candidate Cory Booker while giving himself two sprays of pocket Listerine. “That's why we are willing to go above and beyond to protect that future.”

“Speaking of which,” he addressed to the eager assembled crowd, “Let's keep things above the belt and outside the shirt, OK? Anything else is gonna cost extra.”

With polls projecting a likely Republican Senate victory in an election just days away, the candidates had opened the floor to any idea that could possibly turn the tide. Colorado candidate Mike Udall's “Hotboxing the Vote” idea was considered too controversial for America's liberal moms, while Illinois Senator Dick Durbin's “Guns for Votes” scheme worried safety nuts with the prospect of offering Democratic voters a free loaded firearm.

In the end, the kissing booth was voted the best method to earn votes. It's said to represent the traditional liberal values of free love and non-marital fooling around, while also providing an opportunity for conservative patrons to act on some of their more confusing impulses.

“We want to show the country that the Democrats are the party of ideas and action,” Kentucky candidate Alison Lundergan Grimes said while applying lipstick. “Engaging with the community is a vital part of being a national leader. We Dems know what Americans want, and we're not afraid to give it to them. That's why all our proceeds are going to fund meaningful things, like attack ads against Mitch McConnell and lawn signs with our faces on them. Granted, we have to cover the cost of constructing the booth first.” 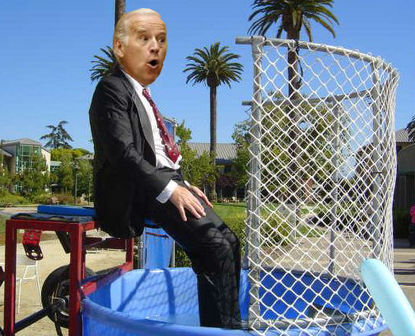 “The truly important thing is showing people that you don't need big corporate donors to win an election,” Minnesota Senator Al Franken chimed in while applying lipstick. “You just need firm commitment, a strong progressive message, and thousands of small donations from you good people here in line! Now who wants a smooch from Al?

“All that being said,” Franken whispered to reporters, “if any big corporate donors are listening, we'd be willing to forgo the kissing booth's rules on tongue limitation for you. Hell, come behind the booth and let's talk. We can get into some pretty weird stuff if that's what it takes.”

After the donation is secured, visitors are guided to the executive dunking booth where, in a show of solidarity from the administration, second-time donors can try their hand at dunking Vice President Joe Biden.