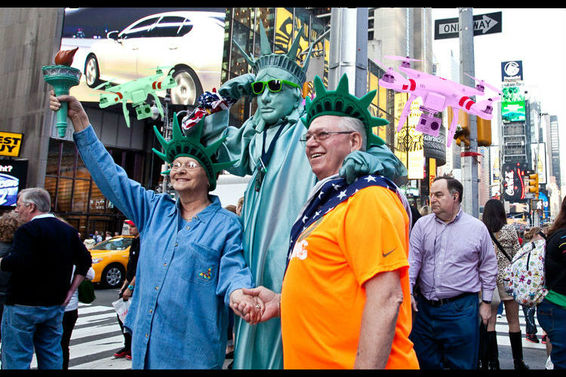 Photo courtesy of Benjamin Chasteen, The Epoch Times
July 23, 2015 – In response to the surprising popularity of the “selfie stick,” the U.S. Department of Defense decided to shore up some extra funds by debuting some new tech in midtown Manhattan: the aptly named “selfie drone,” a flying camera that consistently hovers just two feet past your head, for sale exclusively at street vendors' tables.

The smaller-than-average drone, a device most often outfitted with targeting systems and Hellfire missiles, is equipped solely with a high-tech camera that uploads front-facing photos of you and your buddies directly to your smartphone or tablet.

The device can be activated by voice command, a snap of the fingers, or for a small installation fee, the street vendor can surgically implant a microchip in your brain that lets the drone know when you'd like to be photographed, which is presumably all the time.

“The selfie drone represents American ingenuity and values at their finest,” Defense Secretary Ashton Carter told the press. “This project started out as a way to merely pass the time and make a couple extra bucks for national defense initiatives, but upon discovering the level of absurdity in some Americans' desire to be photographed in the same place, doing the same things millions of people have done before them, we knew we had to go to market fast.

“The drone's popularity is a wonderful testament to the American people's unique self-worth,” he continued. “While most would never be caught dead in a national park, much less Iraq or Afghanistan, it's incredible to see how many will brave the crowds and furries in front of Toys R Us.”

A handful of concerns have been raised about the safety of the drones in such close proximity to so many heads. While Disney parks are already trying to ban the device, the Defense Department is simultaneously working on precision camera tech that would allow the drone to fly outside of park security's hand or weapon range. In the meantime, Carter waved off questions about the danger in Times Square.

“This isn't Toyota, folks. Here in the Defense Department, we vet our tech and prepare for all scenarios. The drones are equipped with motion sensors that briefly elevate the device should someone be too close to walking into or snatching it. It's only a risk should the tourist owner choose to stop abruptly in the middle of the sidewalk, and who would do that?

“The drone doesn't just know how to take selfies, it knows how to protect itself,” Carter concluded. “It knows so much. More than you even care to find out.”

Secretary Carter abruptly denied that the NSA had any hand in the selfie drone's development.