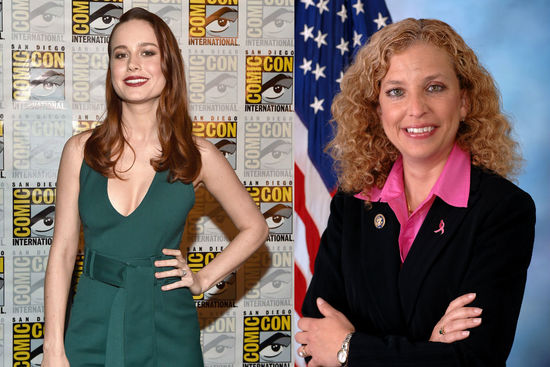 
July 25, 2016 - In a move that surprised many critics, former Head of the Democratic National Convention Debbie Wasserman Shultz just announced her next gig: Head Chair of the 2017 San Diego Comic Convention. Shultz states that she will focus most of her energy at the convention on comic book movies, and making sure that each studio film receives balanced consideration.

“In today's cinematic environment, movies based on comics and graphic novels are more important than ever, and I want to make sure they all receive equal representation. I know that I have come under fire for playing favorites in the past, but I guarantee that next year, I will fight hard to showcase every studio and all the films they make! And not just my faves from Marvel Studios, which I think we can all agree are the most awesome.”

Shultz, who became a political pariah after several thousand leaked emails proved she was pushing the election of a Democratic presidential nominee in favor of Hillary Clinton, swiftly announced her resignation as Democratic Party Chairman. Despite the controversy, the Florida Representative assured fans that all comic book movies and TV shows, including those by Marvel, DC, Image, Dark Horse and Marvel, would be prominently featured at the annual San Diego Convention.

“We can’t have a convention without the big two, that’s for sure,” Shultz told the entertainment press. “But Brie Larson starring in her own movie as Captain Marvel? Who isn’t excited about that? I am definitely with her.”

The San Diego Comic Con has grown exponentially over the last several years as the popularity of comic-related media has skyrocketed. Someone new stepping in as chairman brings with it inherent trepidation, but Shultz was quick to quell those fears.

“As your Chairwoman, I will make sure that every costume, trailer and swag bag for the legendary Marvel Studios and also others will be present and available for all to enjoy! This convention will be on the right side of history!”

When asked what we should expect to see from film companies other than Marvel Studios, Shultz had this to say: “Everyone should be able to choose what company they want to enjoy most, and I support that. That’s why all Marvel panels will be featured in our newly renovated Hall H, while concurrently, DC panels will be held in the spacious supply closet on floor B2!”
​
While Marvel Studios President Kevin Feige was happy and supportive of the new Convention Chairman, DC Comics was not approached for comment.