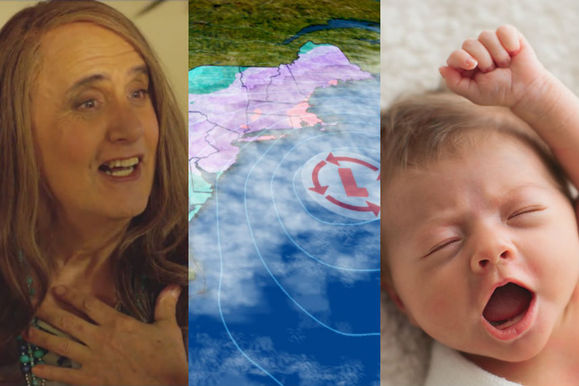 January 26, 2015 – With Snowstorm Juno bearing down on the East Coast, NYC Mayor Bill de Blasio issued a warning to all citizens now trapped in their apartments, that conditions are ripe for an unprecedented number of New York children to be conceived while catching up on the Amazon original series Transparent, starring Jeffrey Tambor as a transgendered woman.

“This could be the biggest, most stifling snowstorm of New York's modern history,” de Blasio said at a press conference Sunday, a heavy nylon coat covering his Maura Pfefferman 'This Is Me' t-shirt. “Work may get cancelled, the subways might have to shut down. In the event that you and your spouse have no place to go, and you start to get frisky while the Golden Globe-winning series plays on your laptop, please remember the risks of unplanned pregnancy.”

With the weather service predicting up to 20 inches of snow and 40 mph winds, many businesses have already shut their doors early, giving employees who are normally too busy or stressed for sex the opportunity to engage in snowbound coitus around the third hour of Tambor's virtuoso performance.

“The storm will probably impact New Yorkers differently, depending on where in the city you reside, and how much Judith Light's steely gaze turns you on,” the mayor continued, dabbing his forehead. “Regardless, we urge all citizens to take precautions. Maybe start wearing a condom around episode six to pre-empt Josh kissing Rabbi Raquel in the mikvah.

“Parenthood is a wonderful thing,” de Blasio concluded, “but let's be real. No kid wants to one day find out they were the unintended by-product of a snow day and a month-old bottle of Pinot Noir, followed by their parents trying to watch Betas and quickly losing interest.”

Early reports suggest that most city couples had ignored the mayor's urge for caution, having planned to finally register the Amazon Prime Christmas subscriptions lazily gifted by their respective siblings.