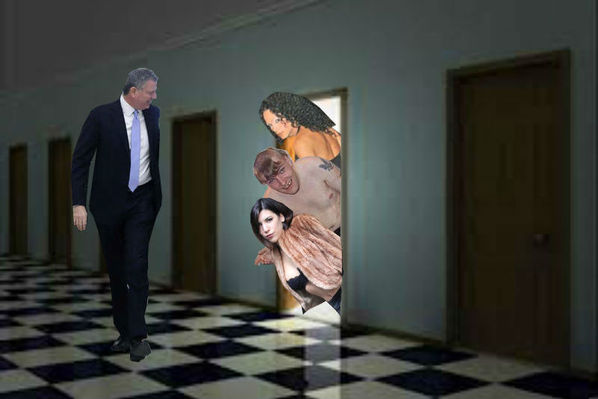 September 12, 2014 – While traversing Gracie Mansion early Friday morning for a pre-breakfast snack, New York City Mayor Bill de Blasio came across a room he had not yet entered and heard muffled sounds within. Upon opening the door, he discovered that it contained all of the drug addicts, pushers and prostitutes of Times Square's fabled past century, having been captured and locked away by former mayor Rudy Giuliani.

“It actually explains a lot, and not just about how midtown Manhattan went from dismal to Disney in under a decade,” de Blasio told reporters on the mansion lawn. “We'd been hearing weird sounds late at night, plus the smell of burnt plastic which we could never seem to get rid of. We thought the place was haunted, but it's good to know it was actually something more plausible.”

For years, New Yorkers have wondered how the streets had been cleared of druggies and sex workers, and where they had gone. It turns out, according to leaked government reports, to have been a nuanced program wherein Mayor Giuliani left trails of crack and taxpayer dollars leading from 5th Avenue back to the mansion, where the quarry was netted and tranquilized before being tossed in a room with their fellow degenerates and told this would be their new home.

“I didn't approve of a great many policies Mr. Giuliani enacted as mayor, but I can certainly see the merit of keeping these folks off the streets and in our house,” de Blasio continued. “I'd be tempted to let them all run free again, but they actually seem to lead good lives here, and the kids have become rather attached to them.”

“Tell you what,” the mayor concluded, reaching into his wallet. “Here's twenty bucks. Don't report this and we'll call it squaresies.”

When asked about the discovery, Mr. Giuliani denied any knowledge of the alleged city program, but asked Mayor de Blasio to give his regards to Rusty and Cinnamon.