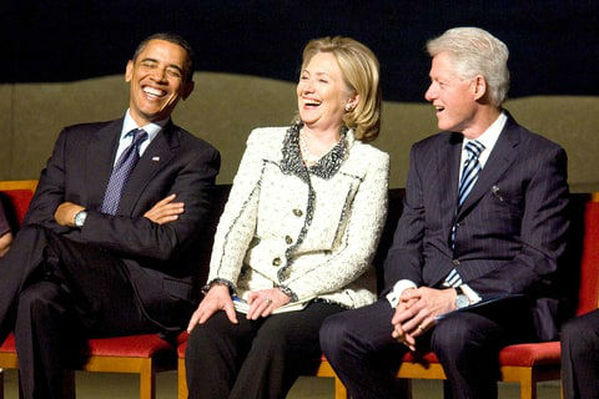 Photo courtesy of US Weekly
March 22, 2016 – Incriminating new emails have become available from WikiLeaks which show that current Democratic presidential frontrunner Hillary Clinton may have had strategic dealings with both current president Barack Obama and previous Democratic president Bill Clinton of the United States, an allegation which has given some liberal voters pause.

The emails, which date as far back as Bill Clinton's first year in office as well as the invention of email in 1993, reveal that Ms. Clinton may have been instrumental in helping enact particular American policies, from drone strikes to health care, from economic surplus to the modern prison system, all from within one of these men's administrations.

“I was totally on her side in the lead-up to this election,” said Darryl Diggs of Columbus, Ohio, a lifetime Democrat. “But how can I trust someone who was pivotal in erecting the prison-industrial complex, and also in providing a blueprint for a more fair and efficient healthcare system, while working at the behest of these very questionable leaders?”

Most voters' memories of these two administrations are hazy. While they are often recalled as times of social progress and relative economic growth, progressives also remember them as times of political compromise and foreign policy bungles. To be associated with anything so complex and nuanced, especially in such close proximity as the State department or the Lincoln bedroom, could mean a death sentence for the Hillary Clinton primary campaign.

“I'm a big fan of the progress made under President Obama,” said Sanders supporter and self-professed 90s fan Jillian Strunk of Wichita, Kansas. “Which is why it saddens me to see so many supposed progressives support a woman who played a key role in the fatal fuck-ups of the Obama administration. Bernie doesn't just have great ideas about how to improve on Obama's achievements, he's also free from the baggage that comes with being a former Obama crony.”

“Plus, I heard she banged Bill Clinton! Gross, doesn't she know where that guy's been?”

In the wake of these revelations, many progressives have decided that they're tired of experienced leaders with heavy political baggage, and that they intend to instead vote for whichever candidate has the least governmental experience in the general election.