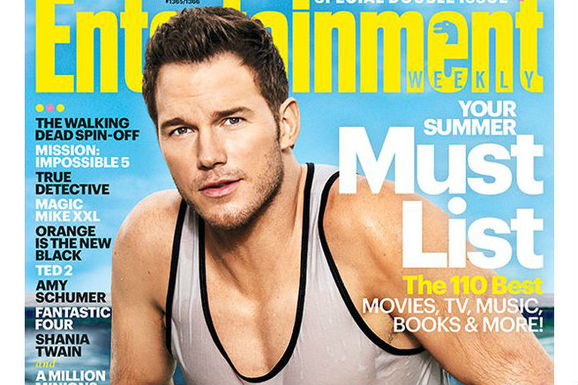 Image courtesy of Entertainment Weekly
June 8, 2015 – The mainstream media has been abuzz this past week with the controversy over Entertainment Weekly's cover featuring a sexy Chris Pratt emerging from the water. Pratt, a widely accepted hunk, was previously regarded as a slightly obese character actor intended solely for comic relief, and many old-fashioned pundits feel that because he was born this way, he should have remained as such.

“Just because he's gotten some professional grooming, and the sopping wet shirt he's wearing clearly shows off his newly formed abs and rock-hard nipples, I'm just supposed to 'accept' the goofy guy from Parks and Recreation as a cover-worthy dreamboat?” questioned Neil Cavuto on FOX Business. “I'm just not ready to do that, and I don't think society is ready either.

“When I was a funny fat kid, like Pratt was before his so-called 'transformation,' I was told that's just the way the world works, and it made perfect sense to me,” he went on. “I don't need to hit the gym to feel better about myself, I just need good old-fashioned emotional repression.”

Mr. Pratt, as Cavuto stated, began his acting life as a shlubby, clumsy, vaguely Jewish goofball, whose accomplishments in the realm of comedy are touted to this day. But in interviews he confessed a certain emptiness, and a desire to be celebrated more for his smoldering glances and finely-toned ass than for his talent.

Thus he began a transition which spanned the last three years, first revealing signs of hunkiness in Guardians of the Galaxy while still maintaining his comedic chops. With Jurassic World hitting theaters Friday, Pratt seems poised to debut himself as the new perfectly sculpted, sexually potent action hero that receives an unfeasible number of job offers from Hollywood.

“I couldn't be more proud of Chris' bravery,” said actresss spouse Anna Faris. “He's so much happier now as a hunk of boring man-meat, and he's thrilled that he doesn't have to try nearly as hard. If he really does become the new Indiana Jones, it will mark an incredible cultural breakthrough for America, while simultaneously marking a creative defeat for the film industry.”

When asked if he misses his old body, and if he would consider putting weight back on for a career-defining role, Pratt said, “Yeah, I mean, there's a lot of good parts for fat white guys too.”