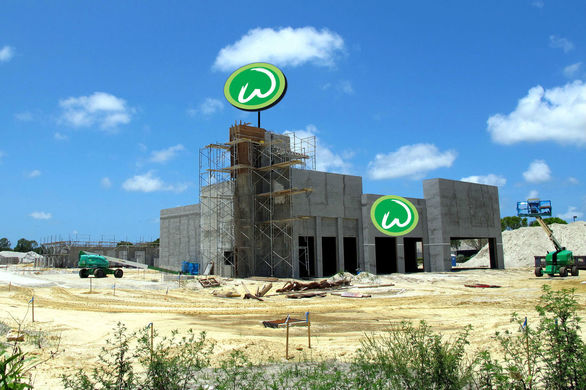 Photo courtesy of Tim Aten/Naples Daily News
January 20, 2017 – Following the inauguration of President Donald Trump, the signature promise of his campaign, to construct an enormous, 40-foot-high Wahlburgers restaurant on the Mexican-American border, is officially underway. Government contractors have suggested that the new location of the Boston burger joint will officially open by December, provided there is enough cheap labor.

“I worry now that people misheard me on the campaign trail,” Trump announced in his inspirational inaugural address. “What some might have thought was going to be a 1,000-mile-long border wall is in fact going to be a full-service, routinely staffed American-style restaurant that serves housemade fries, 'Jenn's Chicken Sandwich,' and my personal favorite, 'The Beast.'

“Despite what the crooked media will say, the intention remains the same,” the new President clarified. “Mexican drug lords and rapists crossing the border with their families will see the giant W in the distance and realize that, instead of a new, lucrative life north of their home country, they can get delicious onion rings and ice cream floats at a competitive price. Then, when they're worn down from all the food, the restaurant's friendly staff will send them on their way, back in a southward direction.”

In addition to the restaurant itself, Trump's team plans to install signs all along the border, informing potential migrants exactly how many miles away they are from the irresistible Wahlburgers eatery. Many proponents of a prohibitively expensive border wall have since expressed feelings of betrayal, but at a later press conference, President Trump addressed the confusion.

“I consider myself a profoundly eloquent speaker, but sometimes I think people just hear my words wrong, which is on them,” he said. “For example, what some might have heard as 'Drain the swamp,' was actually me saying that we are going to 'Train the swans,' meaning that we are going to release a large number of swans in the Lincoln Reflecting Pool, and teach them to sound an alarm whenever a congressman is taking bribes on the Washington Mall, like in that Simpsons episode that taught me so much about government ethics.”

Among other apparently incorrect slogans is the phrase “Lock her up,” with Trump insisting that he was actually saying “Mock her top,” which can be proven by his routine roasting of Hillary Clinton's outfits. Furthermore, a printing error had resulted in the “Make America Great Again” hats forgoing the intended question mark at the end, as the now head of the country had hoped to crowd-source ideas on how to actually do that and what the fuck that even means.

“In any case, I look forward to visiting the tremendous new border Wahlburgers myself, and to running the country for the next 4-8 years,” the President concluded. “It will be very interesting to find out what other things people think I said when I was actually saying the thing I just said I said when I said it.”