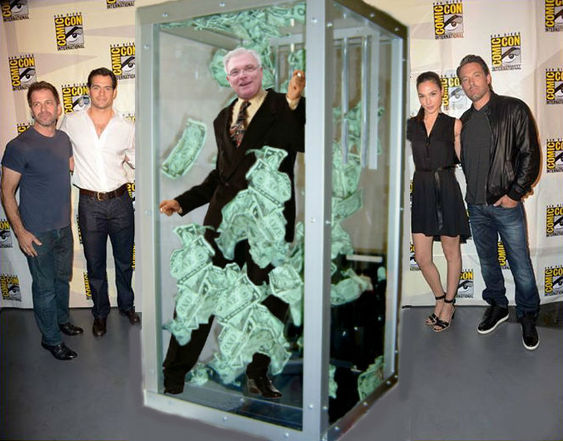 July 27, 2014 - The San Diego International Comic Convention, beginning on Thursday the 24th of July, concluded its long weekend of fun and spectacle on Sunday with the ceremonial “SDCC Studio Exec Challenge,” during which one lucky executive from a major film studio is loaded into a cash booth, and is given unlimited time to grab up as much of the audience's money as possible.

The tradition, which began in New York in 2002 after the success of the first Spider-Man film, is a highly anticipated favorite activity at every convention, because major movie studios pull out all the stops when it comes to leaked details and surprise celebrity appearances, all in the hopes of having their executive picked to go in the booth and make some bank.

This year's lucky winner was Dan Fellman, President of Domestic Distribution at Warner Bros. Pictures, who won a pitched battle against other studio execs by promising more inside info about Aquaman's involvement in the upcoming Batman V Superman picture, as well as a date with Arrow's Stephen Amell to whichever fan tweeted the most support. Fellman stepped excitedly into the cash booth, designed like one of the classic telephone booths in which Clark Kent becomes Superman, much to the elation of the assembled crowd.

“I'm extremely excited I was chosen this year, cuz WB really needs a win,” Fellman said in a post-interview. “Luckily you don't have to spend a lot to win a lot at these conventions. All you really need to do it memorize some buzz words, like Darkseid, or Billy Batson.”

As a conciliatory gesture, Marvel Studios sent Elizabeth Olsen and Aaron Taylor-Johnson, the actors portraying Scarlet Witch and Quicksilver in Avengers: Age of Ultron, through the aisles to collect dollar bills to make the machine go. Without being prompted, fans offered more money to Taylor-Johnson for the promise of pictures of him next to Evan Peters, the other Quicksilver, and to Olsen if she promised to bare her midriff more often on camera.

Once Fellman was sealed inside, the machine was loaded up with cash, before being flipped on by Henry Winkler for some reason. After stuffing several handfuls of twenties and hundreds into his suit pockets, Fellman whipped out his phone and began tweeting more secrets onto the overhead screen, including 'khal drogo v the rock underwater battle hellz yeah' and 'black canary? #whythehellnot,' causing more cash to be sent forward.

“I really love this event, because it captures everything that I find great about Comic-Con,” said an exasperated and overstuffed Fellman, as they packed up the large movie and video game booths and the small comic book creator booths on the convention floor. “Even though the people chose me, as far as corporate guys go, I'd say we're all winners.

“Still,” Fellman concluded, “again, it was so awesome to be the one in the booth this year! Best five hours of my life.”