Cobra Commander Captured California While America Fought Over a Dress 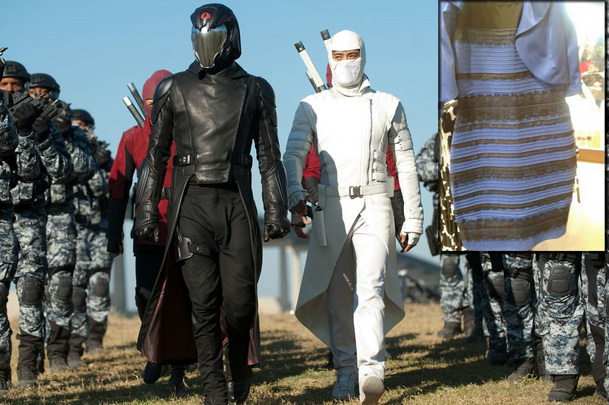 
February 27, 2015 - Evil won last night. You won't hear about it anywhere but here, because the victor was swift, deadly, and most of all, knew how to take advantage of an opportunity. Who was this victor? None other than Cobra Commander.

The Moonmont Chronicle has received exclusive word that the ruthless terrorist organization known as Cobra launched a series of stealth attacks Thursday night on the West Coast. Cobra Vipers attacked from the sky while teams of Night Stalkers infiltrated key military installations. At the time of this report, Cobra Commander is claiming total dominance over an area stretching from Washington to New Mexico.

"It all went according to plan," touted the triumphant villain. "Against the might of Cobra, there was nothing your pathetic military could do!"

But what of G.I. Joe, the heroic unit of soldiers who always manage to thwart Cobra's plans?

"I told you, I had a brilliant plan. G.I. Joe, like most of the fools in America, were distracted by a certain picture..."

At this point, Cobra Commander laughed maniacally and produced the picture in question. It was a photo of a dress of bluish hue, with black trim. Or maybe it was a white dress with a gold trim. This reporter fails to remember the details clearly, as he was dropped out of a trap door by Cobra.

The Chronicle reached out to G.I. Joe for a statement, and received this as a response:

"This is G.I. Joe, real American Heroes. We are always dedicated to fighting for freedom over land, sea, and air. Thank you for your inquiry. In response to your question, it seems that our special forces were busy decoding a certain piece of intel that was uncovered by Scarlett last night. There was a bit of a disagreement among the Joes as to certain details regarding the information gathered. Apparently, Duke insisted (rightly) that the dress was white. But Shipwreck said that it was blue. Crazy, right? Roadblock agreed with him, though, and tried to make his point by putting the picture up on the big computer. Sgt. Slaughter set them both straight by saying that the dress was indeed white. Then Gung-Ho tried to say that it was lavender or something, but who listens to him? There was a big argument about it, and Cobra must have attacked while we weren't looking. Because seriously, everyone was involved in this dress thing. Well, almost everyone. Snake Eyes didn't have anything to say."

Cobra, however, still has plenty to say. The terrorist leader claims that he has an all new plan in store for tomorrow. The Joes, meanwhile, are still caught up in red tape. It seems as though humanity has little to hope for.

Because really, in what kind of world is that dress white?