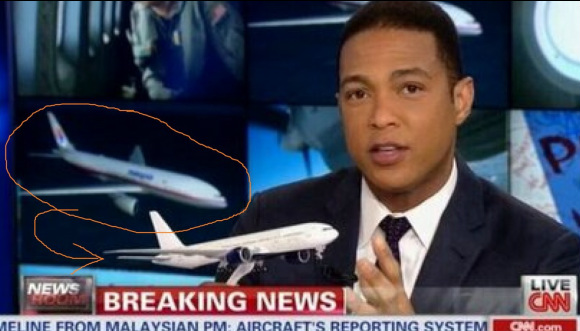 July 21, 2014 - Last Thursday, Malaysia Airline Flight 17, flying from Amsterdam to Kuala Lumpur, was shot down over Donetsk in Ukraine, claiming the lives of its 298 passengers. While evidence and the international community all point to Russian separatists as the culprits, CNN has officially reported their discovery that the jet was attacked by the radicalized passengers of Malaysia Airline Flight 370, following on from its mysterious disappearance in March.

“As Flight 370 was never found, we can only assume, based on our rampant speculation, that these two events are connected,” reported Don Lemon on CNN Newsroom. “However the missing passengers may have arrived on the scene, what is clear is that they brought this other flight down while posing as separatists, perhaps to enact revenge on Malaysian Airlines for losing them in the first place.

“We can't be certain,” Lemon continued, “but we can still report it.”

Despite gutting their investigative department two years ago, CNN insists that it maintains the journalistic credibility to assess the situation in Donetsk, which is about 6,000 miles from the Indian Ocean. Clearly, their talking heads posited, that is where Flight 370 went off-grid, hijacked a private fishing boat, sailed to the Port of Salalah in Oman, and snuck north to Ukraine posing as Baha'i pioneers.

“There are a lot of wild theories out there, and we at CNN feel it is our responsibility to sift through them by reporting them all as plausible fact before landing on a good one,” said anchor Ashleigh Banfield on Legal View. “Personally, I don't think we can rule out the possibility of romance gone wrong. Maybe one of the 370 passengers was jealous of one of the couples on 17 and couldn't take it anymore. We'll never know until we catch these bastards.”

Hoping to remotely examine all possible angles, Martin Savidge quickly leapt back into CNN's flight simulator to learn how the attack was most likely carried out. While information on the scene shows clear signs of a ground attack by Flight 370's passengers, Savidge does not yet want to rule out the possibility of a midair rocket attack by a stewardess hanging upside-down from the plane's wheels, Die Hard style.

“We're open to any and all explanations, which is what makes us such a good news network,” said Wolf Blitzer in The Situation Room, having just wrapped up a poll of CNN viewers. “It seems 80% of respondents believe these crashes have nothing to do with one another, but the other two of you were very insistent that this is the work of either aliens or that talking computer from The Winter Soldier. The truth probably lies somewhere in the middle.”

In the meantime, Obama and other world leaders appear poised to butt heads with Putin over how best to address this senseless tragedy, and CNN wants you to tune in on Tuesday night, when Anderson Cooper will ask a hologram Nick Lachey how he thinks they did it.