CNN Employs Jedi Mind Trick to Soothe Voters: “This is Not the Candidate You're Looking For” 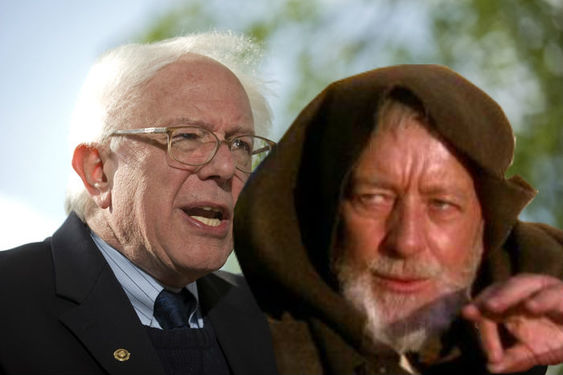 Images courtesy of wbko.com and Lucasfilm Ltd.
August 18, 2015 - Traditional news media has made a strong effort in the past months to ignore the massive rallies drawing enthusiastic supporters of Democratic presidential candidate Bernie Sanders. Finally deciding that not reporting on these events and sidestepping his strong progressive record was not enough, CNN has employed a resident Jedi Master to wipe viewers' memories.

“When Sanders first announced he was running, we were told of a disturbance in the Force by our interns, or 'Padawans',” said head of programming Jeff Zucker. “We quickly realized that a Sanders victory in the primaries would create a need for issues-based political reporting. That is not the CNN way, nor the path of the Jedi Order.”

The Sage Master who appeared round-the-clock on CNN, who scholars could only identify as 'Ben,' repeatedly waved his left hand at the viewing audience and recited, “You don't need to see his qualifications. This is not the candidate you're looking for. Continue to go about your business. Donald Trump coverage at eight.”

The message was broadcast to millions of viewers stuck in airports, or whose remote control had run out of batteries, across the nation, at the top of every hour, immediately followed by some programming about Hillary, Jeb, or some new shit Trump said.

“CNN and the Jedi have often had to step in to save the country, nay, the galaxy, from itself,” Zucker continued. “The citizens of the American Republic think they want change, but what really makes people happy is the advancement of political dynasties, like the Organas on Alderaan.

“Better yet, who doesn't want to hear about a self-made visionary like Donald Trump? Why, he reminds me of that upstart Chancellor Palpatine, who as we all know, began his career as a real estate mogul with a string of bankruptcies behind him.”

Zucker refused to comment on allegations that CNN dispatched Jedi Shadows to various public appearances by Sanders, who have been using the Force to mess with his hair.