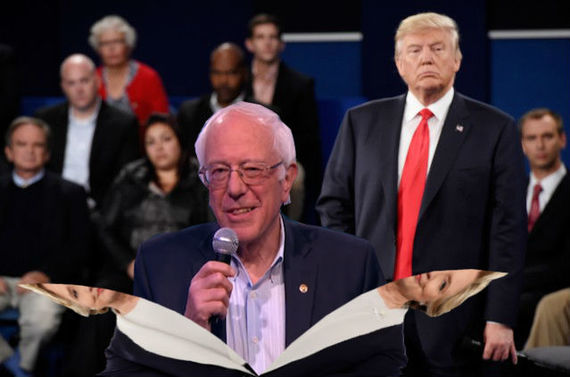 October 11, 2016 – While some mainstream Democrats expressed disappointment that Sunday night's second Presidential debate tended more towards personal attacks than policy and substance, many more skeptics and dissenters in the party's liberal base were outraged that Hillary Clinton did not unzip her costume to reveal that she had been primary contender Bernie Sanders the entire time.

“I gotta say, I went into this debate with high hopes,” die-hard Bernie Ladybro Greta Muldoon told the press, “especially since she spent so much of the last debate saying the kinds of stuff Bernie would say when he was running. I was sure it must be him under there, and that he would take this opportunity to rip his Clinton mask off in front of Trump and all the undecideds, Scooby Doo style.

“Oh well, guess we'll have to wait and see how next Wednesday shakes out.”

Indeed, since Secretary Clinton began laying out policy proposals similar to those Sanders touted in early 2016, Bernie supporters and conspiracy theorists alike have merely assumed that he had at some point taken her place using a flesh-toned jumpsuit, an array of unflattering pantsuits, and that voice-modulating microchip from the movie Face/Off. Most undecided voters say that this scenario is preferable to the obvious alternative: that she is in fact a lizard person in disguise, just as Republicans have always suggested.

“Clearly there's something under there, most likely a very tired and sweaty Bernie Sanders,” insists Brigsby Hammerswich, curator of the website GlobalizationTrutherJusticeWatch.edu. “It explains her recent bout with pneumonia, and why she kept scratching her face during the first debate. It also would explain why she says things which sound so coherent and appealing, when the real Hillary Clinton we've all taught ourselves about is a greed-driven, homicidal lunatic who laughs about rape and tells Wall Street we should eat poor babies.

“I myself wouldn't vote for either one, cuz I'm not a goddamn socialist,” Hammerswich went on. “But I can understand the frustration on the part of many liberals, what with the surprising new ways that Clinton can find to deceive them.”

While those who attest they would vote for Sanders are still struggling with whether or not to support Clinton, most say that the revelation that she is in fact Sanders in disguise would probably tip them to her side. Still, many say they would have some questions for the man they previously thought to be Clinton.

“No single candidate has my vote implicitly,” said Muldoon. “Even if Sanders were to step in now, I'd have some serious questions for him. Like, 'Where is the real Hillary Clinton?' 'Why handicap your candidacy by dressing as someone everybody hates for some reason?' 'Does it feel weird to pass food through two separate mouths?'

“That being said, he'd probably still win in a landslide. All the polls on the sites I go to have him beating Trump by a factor of a bajillion to one.”

According to a recent poll, when die-hard Trump fans were asked if they'd still support Trump even after he turned out to be Barack Obama in disguise, 95% of their heads exploded.