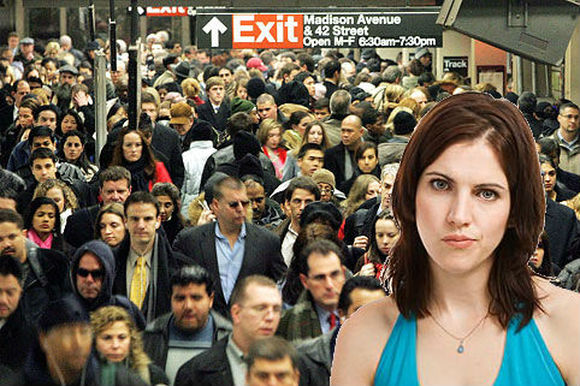 September 5, 2014 – Due to an influx of foreign immigrants and young Americans, combined with a low mortality rate as compared to the rising birth rate, New York City has seen its third straight year of population growth. This means more crowds, longer lines, and more stress on the subway system, which has caused one resident, Kendra Oates of the Lower East Side, to openly wish that more people would leave this bloated city where she has taken up willful residence for nine consecutive years.

“I enter the subway at Bleecker St. at 8 AM and it's a claustrophobic nightmare. I get out in midtown and it's even worse,” Oates, 31, says of her morning commute to her job as a server at Guy Fieri's American Kitchen, a business entirely dependent on the business of tourists. “I'm always like, 'Why do people even wanna come here? Go where there's open space!'”

Oates, who moved to the New York from Hartford with dreams of becoming a celebrity chef or similar reality TV personality, contends that other young people who move to the city with similar aspirations are extraordinarily selfish.

“With so many people stacking up, the city's going to become unaffordable,” Oates kvetched as she walked out of her $2500 studio apartment. “Seriously, there's so many flourishing areas in this country that other people ought to consider, like Portland! Or Massapequa.”

Despite her love for the city she incessantly complains about, Oates admits that she likes to occasionally get away to places less stressful. “Whenever I get a chance, I like to plonk down the cash to experience a different environment. Places like Chicago, London, even Bombay that one time. It helps me take my mind off the stinky, stuffy horror of New York.”

When asked her favorite thing about New York, Oates confidently replied, “The people.”