CIA's Torture of V.I.L.E. Henchmen Did Nothing to Reveal Whereabouts of Carmen Sandiego 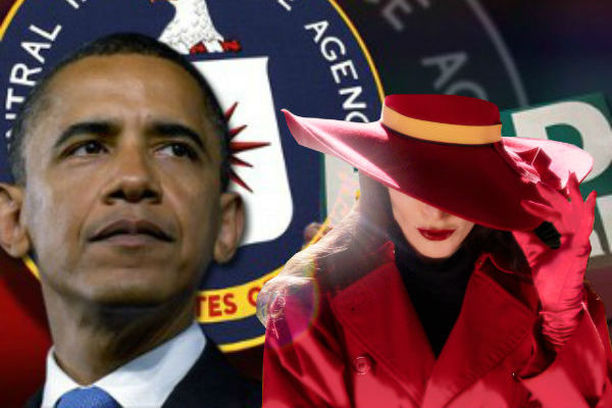 Images courtesy of ABC News and Corsiglia
December 10, 2014 – A report released by the Senate Intelligence Committee on Tuesday illuminated the nature of severe torture tactics used on secret prison detainees leading back to the Bush administration. Not only did the report shed light on the brutal nature of these interrogations, it confirmed that the result was little to no information regarding the whereabouts of the Vixen of Villainy, Carmen Sandiego.

“That red menace has eluded us since the early 90s,” one interrogator barked, according to declassified documents, at Rob M. Blind, a low-level V.I.L.E. henchman. “If you tell us which nation she plans to flimflam next, we'll shut the music off and give you a real bed to sleep in!”

As suggested, the report paints a vivid picture of sleep deprivation and stress positioning, as well as rampant use of waterboarding and even incidents of “rectal feeding,” all in the service of tracking down the mastermind behind many notable heists, including the stealing of the beans from Lima.

Sandiego, now believed to be in her late 40s, was actually a CIA agent herself back in 1985, when the organization was still called ACME. Originally thought to have resigned in order to go into hiding and seek personal gain, it is now widely believed that Sandiego became sickened by the conduct of CIA operatives, and the way in which superiors and politicians turned a blind eye.

“In a big way, the findings of this report validate the disillusionment felt towards the United States by many organizations and individuals around the world, including Carmen herself,” said Dianne Feinstein, chairwoman of the investigation, and former friend of Ms. Sandiego. “If we continue to throw our prisoners in secret dungeons and treat them like animals, can we really claim the moral high ground over someone who merely ransacked Pakistan and put a scam on Scandinavia?”

Perhaps most damning of all is the finding that almost 25% of operatives detained by the CIA were wrongfully held, with no due process. Apart from a sinister-sounding name, no hard evidence could be found to warrant the capture of prisoners such as Vick the Slick, Dee Pockets, Stu L. Pidjin, or “Shaky” Al LeBye, himself an American citizen.

“It seems clear to us on the panel that the CIA overstepped its authority, and must be restructured around simple detective work,” Feinstein continued. “There is never a need to torture, especially when there are such obvious clues scattered about the globe and American history to lead you to Carmen's doorstep. Seriously, if an operative tells you to 'speak to the cat that no one nose,' you head to the Sphinx! You don't attach goddamn electrodes to the guy's balls to force the answer out of him.”

When asked if he would consider issuing an executive order to discipline the CIA for past actions, President Obama said, “I'll be with you in a minute, I'm trying to find this Waldo guy,” then quickly told his chief of staff to get John Brennan on the line.