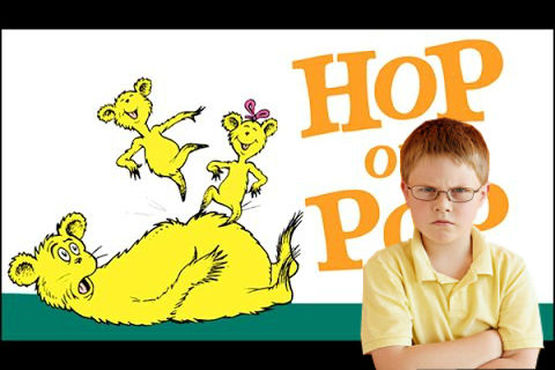 
August 26, 2015 - Newly arriving first grader Aiden Montblanc, at Manhattan’s Upper East Side elite private elementary school St. Benedictus Prep, is refusing to read an acclaimed children’s story, Dr. Seuss’s Hop on Pop. The book is part of all first grade English curriculum, and is read in every class at the Christian school, which is known to pump out many of America’s most intellectual middle schoolers.

According to second grade wunderkind Emma Rochester, St. Benedictus’s school news editor-in-chief, Montblanc claimed he will not read the Dr. Seuss book due to his devout faith in Christianity and Hop on Pop’s “blatantly implied” message of incest. “I mean, come on,” he told her. “Look at the graphic picture on the front cover alone. Two little kids bouncing over their daddy’s private parts. These pictures are totally gross, and they compromise my Christian beliefs.

“I don’t think I should have to violate my conscience over this. What kind of school am I going to, a Christian school or just a groddy one? I refuse to read this book.”

During a press conference in St. Benedictus’s elephantine cafeteria, [Side note: Today’s lunch was the ever popular Italian Dunkers] Emma Rochester went full Megyn Kelly on Montblanc with a surprise question on a related subject: “With abortion being a hot political topic as of late, what are your thoughts on whether abortion should be allowed in cases of incest?”

Montblanc immediately responded, “At this point in my life there has been no scientific evidence of where I came from, be it my mommy’s tummy or a basket delivered by the stork.”

Continuing after a dramatic pause, used to stellar effect, he stated, “But from what I have inferred when spying on my parents with my best friend Ethan during one of their lavish dinner party conversations, the Christian thing to do is to force Christian women to have their unwanted Christian babies even when the women were involved in un-Christian-like incest. I have absolutely no idea what that means, but I believe it to be true because my mommy and daddy are the best and the most rich.”

After Montblanc threw down his hard stance on both of the incestual issues, Frank Luntz of Fox News fame did his famous Luntz focus group with other new first graders at St. Benedictus Prep. The focus group revealed that everyone is “turnin’ up” for Montblanc, and the girls want him to be their “bae”.

With this newfound popularity, Montblanc has declared that he will run for St. Benedictus Prep student council.

We will continue to cover all things Aiden Montblanc as his story progresses.