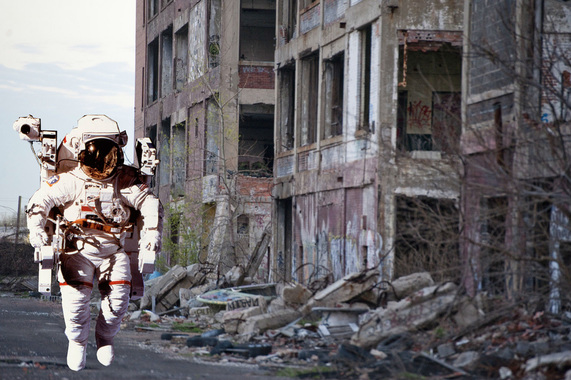 July 14, 2014 - Last week, seeking to rekindle the spirit of American greatness at a fraction of the cost, NASA revived its defunded shuttle launch program. Then early this morning, the organization announced triumphantly that its astronauts had successfully touched down at their budget destination, the barren landscape of Detroit, Michigan, and have begun to explore its surface.

“Our goal is to recapture the grand innovative spirit of the 1960s,” said Administrator General Charles Bolden on the eve of the launch. “And what better way to celebrate that time than by sending astronauts to Detroit to look at stuff? Their findings could prove vital to restoring a moderate, financially feasible level of faith in our nation.”

Despite what appears to be a fully breathable atmosphere, NASA insisted that its astronauts remain in full protective gear, as Detroit's violent crime rate is projected to be approximately five times higher than anywhere on Earth. They were also equipped with flashlights to help explore the city's countless dilapidated structures after the sun disappears from view, at the absence of working street lights.

“This is unlike any manned space mission we've undertaken previously, as we believe this place may have contained actual sentient life in times past,” said Director Jim Green of the Planetary Science Division. “It's convenient to think that all the recent fires in Detroit occurred due to planetary forces, but how exciting is it to think that much of it was arson?”

The astronauts, who for budgetary purposes were asked to take pictures of the desolate municipality with their personal iPhones, have already texted back images of several fresco murals, evidence of what may not only have been sentient life, but a once great civilization built around a dying industry, unwilling to change its ways.

The question remains for NASA's science division: could this place sustain life? And if so, what would it cost the taxpayer?

“We believe that through significant terraforming, it is absolutely feasible to create a haven on Detroit's surface for escapees of this sad Earthen plane full of memories,” Dr. Green waxed poetically. “However, before you consider paying for all that, why not also consider your old pal NASA? Think of all the cool places we could explore with our funding restored, like Mars! Or Toledo, Ohio.”

Astronauts will remain on Detroit's surface for six days, at which point they will be asked to pick up their gear and hitch a ride to the DTW airport for a flight back to Houston.