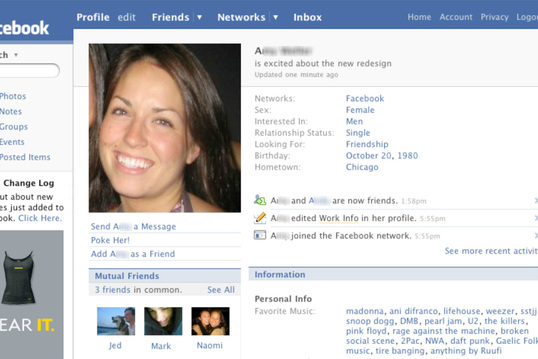 
September 12, 2015 – There appears to have been an important development in the life of local barista Amy Sumerson today: she changed her Facebook profile picture from the one of her embracing her boyfriend. Instead, her photo is now one from last year's Halloween party, where she sports a sexy Freddy Krueger costume and is very much alone.

"I was checking to see if my status about Donald Trump's hair got any likes," said Dan Haverty, a co-worker of Sumerson's. "And there it was: Amy Sumerson had changed her profile picture."

Haverty is reportedly only seen talking to Sumerson during lunch breaks, but he states that he really feels a connection with her. So he felt totally in line when he decided to message her.

The message was “seen” as of an hour ago, but Amy has yet to respond. Meanwhile, sources have indicated that other parties are starting to take notice of Sumerson's photo swap. As of press time, her picture has 87 likes, and 30 comments. The comments range from supportive monologues from female friends to one male acquaintance's "Yo girl hit me up".

Haverty remains positive, however, that he will see a response. "I'm sure she's just going through some stuff. She'll get back to me. I mean, I'm pretty sure I was the first to respond. And that's what it's all about, you know? Striking while the iron is hot."

And if she doesn't respond?

"I'll just talk to her at work tomorrow. Girls like that, you know? They like the attention. That's why she made it public by swapping her photo like that. She wants my attention."