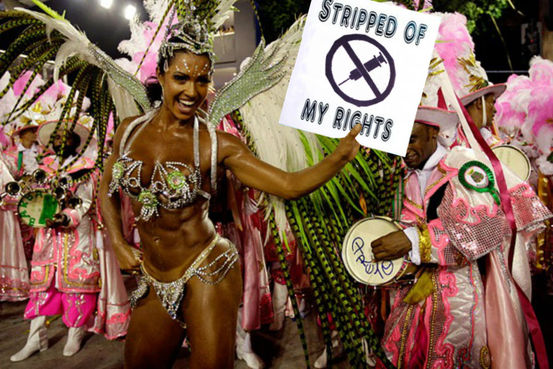 February 3, 2015 - Several South American protests spiraled out of control this past weekend. The catalyst? Brazilian vaccinations, an increasingly hot topic south of the equator.

Traditional vaccines are given at a very young age, and only need to be administered once. Brazilian vaccinations, on the other hand, are a cultural staple of the nation, sought after by adult women in particular, and need to be re-administered often, up to multiple times per week depending on hormone levels.

The controversy arose when prevalent Brazilian environmentalist group VIDA released a shocking report last week that linked Brazilian vaccinations to clearcutting in the Amazon rainforest. In the report, VIDA spread out their position. “We cannot support deforestation, no matter how deep into bikini season we are.”

Larry Flynt, owner of Hustler magazine and Brazilian vaccination expert, has decried the group's findings publicly. “VIDA is stepping on the toes of thousands of beautiful young women and men. Who are these so-called environmentalists to tell model citizens what they can or cannot do to their lovely, supple bodies?

“I'm not normally in the business of rooting out agitators,” Flynt continued. “But I tell you, these whistleblowers haven't got a single strip of credibility.”

The protests were eventually dispersed when police fired tear gas into the crowd. “We thought it was going to get more violent,” reported one protester. “It was a very close shave.”