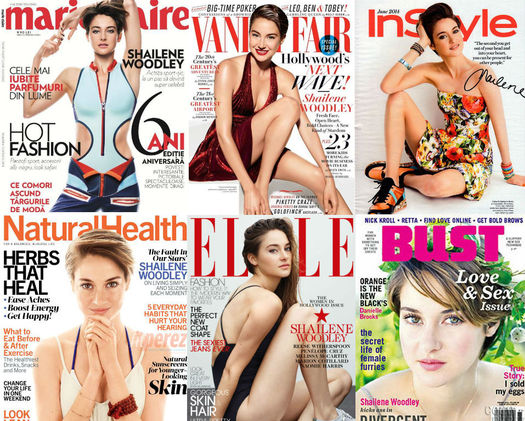 July 9, 2014 – In an unprecedented display of coordinated action on behalf of public awareness, magazines specializing in a wide variety of critical subjects, including culture, beauty and fashion, have united their covers behind one message: actress Shailene Woodley exists, and America can't risk not knowing that any longer.

The actress, who has appeared in the film Divergent and deleted scenes from The Amazing Spider-Man 2, has been in existence for 22 years but had largely been ignored for most of those years. Marie Claire editor-in-chief Anne Fulenwider feels that this ignorance could lead to a wider tragedy: fewer movies with Ms. Woodley in them.

“The fact that so few Americans care about Shailene and her impact on people's lives shows we still have a long way to go as a nation,” said Fulenwider in an ABC News interview. “It's something that we here at Marie Claire feel, in our hearts, needs to change, and we know that our allies at Vanity Fair and Bust stand with us!”

Editors of these publications have pushed similar awareness campaigns in the past surrounding Britney Spears, Ryan Reynolds, and Miley Cyrus. Though many Americans were already aware of these celebrities, magazines like Seventeen and Esquire sought to minimize the potential tragedy of people not seeing them in concerts and films. With Shailene Woodley, editors saw an opportunity to boost awareness early, and make up for past mistakes.

“It would be a national disgrace if Shailene escaped the public's eye, even for a second, and irreparable damage was done to her movie career,” warned Elle editor-in-chief Robbie Myers. “Before you know it, other hardworking young actresses could be seeking media attention, and what are we to do then?”

Time will tell if America is ready to face the reality of Shailene Woodley on their neighborhood newsstands and billboards. For now, these compassionate editors remain optimistic about the impact their actions will have on the box office of Insurgent, out next year.

“We have to stay positive, but forceful,” Fulenwider cautioned. “Awareness is the first step, but involvement is the only thing that will help stop Shailene from evolving and growing as an artist, or a human being. So long as people know she's out there, and place unrealistic expectations on her shoulders, we'll know we've done right.”