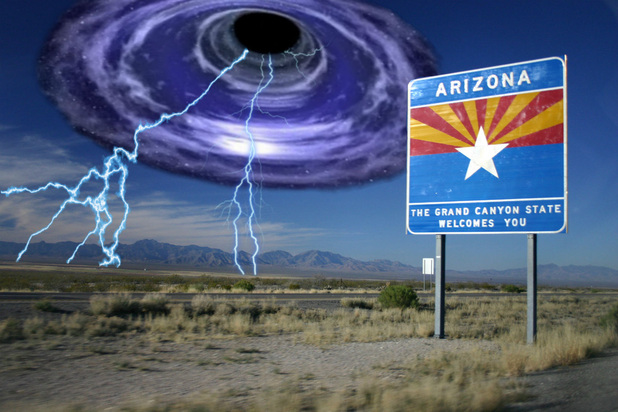 November 5, 2014 – As if to symbolize the dire consequences of a lack of state unity in the United States, Arizona's refusal to implement Daylight Savings Time, despite repeated warnings from top astrophysicists and Christopher Nolan, caused a seismic tear in space-time on Wednesday, warping the very fabric of reality over the Sonoran Desert just outside of Tucson.

“It opened up about 10 AM our time, and it's been sucking up coyotes and gila monsters all day,” said Tucson resident Stan Orbach. “We're not sure yet if they're being squashed into a quantum singularity, or having their genetic structure altered to greatly increase their size, Godzilla style. Either way, it's a small price to pay for maintaining our year-round timekeeping independence.”

Daylight Savings was first proposed in 1895 by George Vernon Hudson, astronomer and amateur prophesier of doom. He suggested that an hour's shift in the summer would grant crucial sunlight hours for the sake of businesses and child safety, and that even the slightest deviation from this system could rupture the fragile barrier between dimensions which exists in the vacuum of space over the American Southwest.

The participation of the majority of first world nations seemed enough to stave off disaster, but perhaps it is because of the example set by Guatemala or Fiji that Arizonans felt entitled to challenge the clock-adjusting measure, and are now seeing the consequences play out in their color-shifting skyline and rapidly approaching stars.

“I figure it's the kind of thing no one will notice after it settles in,” said Pepper Horn of Phoenix, where this morning an entire forest sprung from the ground and withered away in a matter of hours. “It's actually quite beautiful! The real point is, it's not the government's place to tell me what time it is, regardless of the effect on the interstellar whatsit. Keep your big government hands out of my valuable time slots, I say.”

“Arizonans are a smart, decent people who can make decisions on their own,” said Orbach. “And when that funny-dressed man fell out of the portal and began screaming about the impending arrival of Meknok, the space conqueror of Alpha Centauri, we decided to ignore him, cuz he's obviously crazy.”

Wasting no time taking advantage of an opportunity, Arizona lawmakers plan to bring legislation to the floor of the State Senate, advocating that the wormhole be moved south, right up against the Mexican border.