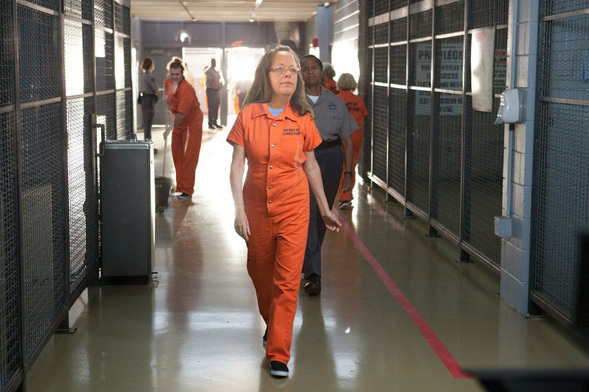 Image courtesy of Columbia Pictures
September 4, 2015 – With Rowan County, Kentucky clerk Kim Davis sentenced to remain in jail for as long as her government office refuses to issue marriage licenses to same-sex couples, prison system analysts are now concerned that this growing incarceration trend could simply lead to more prejudiced county clerks out on the streets in the long run.

Studies show that, while a handful of inmates are in fact rehabilitated, putting thieves, murderers, and intolerant elected officials together in overcrowded confines fosters an environment that tends to create more public servants derelict in their duties than it rehabilitates.

“The district court's decision to jail Davis rather than fine her sets a dangerous precedent,” says legal expert Jill Balbowie. “Not because of her religious beliefs, but because our prison system is not designed to help her see reason or grow as a person. Instead, she'll probably leave stronger in her convictions than ever, and with new criminal contacts to boot.”

Other scholars of correctional policy agree, Davis in unlikely to have her administrative bigotry shaken by time in lock-up. Instead, they anticipate she'll get out and return to her obstructive ways, albeit perhaps in a different Kentucky county like Magoffin or Pike. She may even flee to Mexico and become a county clerk there until news of her release dies down.

“Worse still, Davis may take on followers inside,” Balbowie told reporters. “She managed to convince the rest of her office not to issue marriage licenses, so who's to say she couldn't tempt a few killers and drug pushers into the seductive world of record-keeping and notarizing?

“Next thing you know, there's an epidemic of religious hypocrites in elected offices throughout Kentucky, completely unwilling to do their jobs while taking home $80,000 a year in taxpayer money. Our prisons never address these issues.”

Experts worry that a trend of criminally irresponsible county clerks may already be in motion, as it seems that many throughout the country are willing to provide a firearm permit for just about anyone.