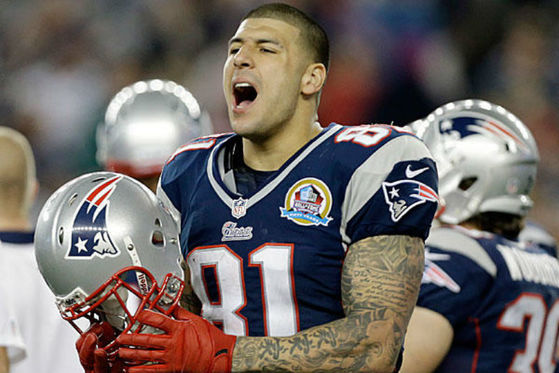 April 16, 2015 – After former Patriots tight end Aaron Hernandez was convicted of first-degree murder on Wednesday, sports and legal analysts in the media came forward to express their shock that his aggressive behavior was not improved by a healthy combination of sudden wealth, a career in full-contact sports, and easy access to firearms, all considered cornerstones of a well-adjusted American male.

“When Hernandez was drafted by the Pats out of college, it was considered a risky move due to his history,” said ESPN legal analyst Roger Cossack. “But team owners were certain that they could turn him into a model citizen using the three C's: cash, Colts, and concussions. Sadly, it seems it didn't take.”

Hernandez, who comes from a troubled home and who's run with a rough crowd since grade school, was sentenced to life in prison for the murder of an acquaintance, Odin Lloyd. Family and teammates have questioned what caused Hernandez to so casually throw his life away, especially when surrounded by cash to burn, large athletes threatening physical harm, and loyal gun-toting friends who just need a few favors.

“Typically speaking, when in possession of a handgun and a sizable bank account, an athlete becomes a humble, gentle, model member of society,” Cossack continued. “In the case of Hernandez, though, these things seem to have had the opposite effect, instilling him with some false sense of invincibility, which was only amplified by his success at such a young age in a sport dominated by 250-pound monster-men.

“It's been a difficult few years for the NFL when it comes to off-the-field violence, but hopefully this will serve as a wake-up call: players need more money and more time on the field to focus on blocks and tackles. Time spent at home in the players' broken industrial cities that defined their childhood should be reserved solely for the off-season.”

At a loss for what went wrong when Hernandez had all the power in his hands, the NFL is considering an investigation into his girlfriend Shayanna, and whether she undercut the rehabilitation process by demanding his time and attention.