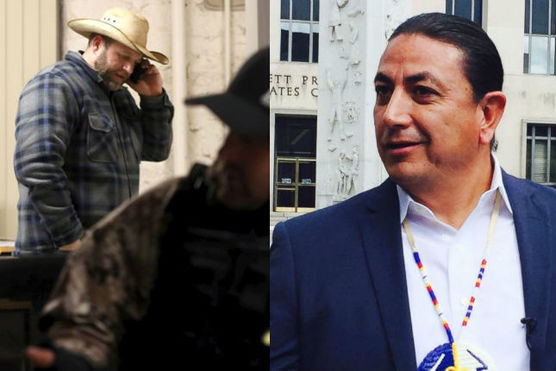 Photos courtesy of Jessica Gresko, AP and Jim Urquhart, Reuters
December 5, 2016 – Ammon Bundy, the leader of the Oregon militia who were legally exonerated after the armed takeover of a national wildlife refuge, reached out to congratulate David Archambault II and the other water protectors of the Standing Rock reservation who had staged a successful unarmed protest on their own lands, saying that this has been a great year for totally equivalent victories over the powers-that-be.

“Hi Dave, it's Ammon!” the call began. “Maybe you've heard of my work. I'm the guy that led a gun-toting crew into a federal building and occupied it for over a month in order to force the government to turn over land we didn't own? I just wanted to say congrats on your successful stand against the Dakota Access Pipeline, which I hope was inspired by our bravery and rebellious spirit!

“You sure showed those cops a thing or two! Not sure why you went about it unarmed, seems like you really took a beating. I'm sure if those vets had shown up with some semi-autos, the public and the court system would've gotten on your guys' side even faster, like they did for us. But hey, not my place to question a fellow revolutionary!”

Archambault, who appeared confused by the call, mainly nodded and muttered affirmations as Bundy lauded the similarities between their two ventures: one, a non-violent protest that lasted most of 2016 and weathered perpetual attacks from 76 nationwide law enforcement agencies; the other, a brief sit-in that was kicked off by voicing support for two arsonists who were not asking for help to begin with.

“I really think we taught the people of this country a valuable lesson, Dave: that, regardless of skin color or hat preference, any group can cause a ruckus for justice, no matter how silly the cause,” Bundy said, referring to Archambault's protest of an oil pipeline that had been rerouted from a prominently white area of North Dakota to cross through native water sources and cultural sites.

Bundy concluded the call by telling Archambault that, if the Sioux tribe ever gets a hankering to play a friendly game of Cowboys and Indians, he and his crew have been feeling extra nostalgic.