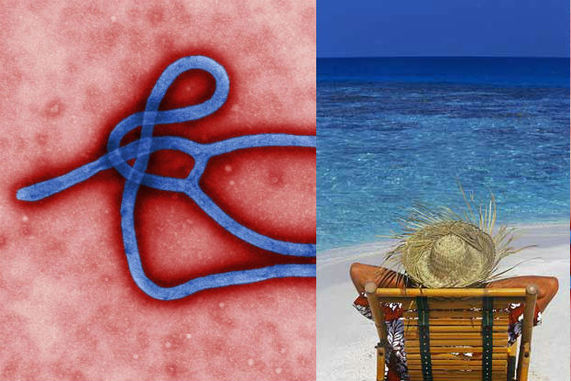 August 5, 2014 – Tuesday marked the arrival of the second humanitarian doctor who contracted the Ebola virus to the continental United States, a move which sparked fear and angry calls to the Center for Disease Control to keep them isolated in Africa. While Ebola is not an airborne virus and is only contagious via fluid contact, Americans worry that the slightest misstep by the CDC could result in catastrophic changes to their summer vacation plans.

“My flight to Miami has a stop-over in Atlanta,” groaned future vacationer Eric Pinter, referring to the site of Emory Hospital where both patients would be treated in isolation. “Now my irrational fear might force me to change my flight plan last-minute! Which I totally bought the insurance for, but I'm still gonna owe like 35 bucks of it, which is annoying.”

The Ebola virus, which causes decreased function of the liver and kidneys and often internal bleeding which commonly results in death, is largely confined to West Africa, where very few Americans are ever inclined to spend their time off from work. Now, with these two good samaritans stateside, citizens fear an outbreak which could result in a sad series of staycations.

“By the time the weather starts to turn, this thing could be affecting dozens of cozy beach towns,” lamented hopeful traveler Cindy Parcell, fresh off her shift at Jamba Juice. “We all need a break from our tough lives, but now that these infected bozos are here, even the most fun locales like Myrtle Beach and Cancun may be at risk!”

News that an experimental serum had been developed to treat the two heroic citizens did little to comfort prospective trippers like Pinter, who said he has seen enough pandemic, dystopic and zombie movies to know how this goes.

“If this contagion is allowed to remain in the United States, where all the important stuff happens, it's only a matter of time before flesh-eating corpses or hyper-intelligent chimps are roaming our beaches and national monuments, totally bumming us out. You'd think the so-called smart guys as the CDC would see the writing on the wall.”

The two Ebola doctors in Atlanta could not be reached for comment, due to sensible restrictions on access to the patients. It was suggested by one nurse, however, that the medical missionaries were sorry that they had made everybody all wiggy, and that everyone could be assured that they hoped to return to Africa to continue their work as soon as humanly possible.