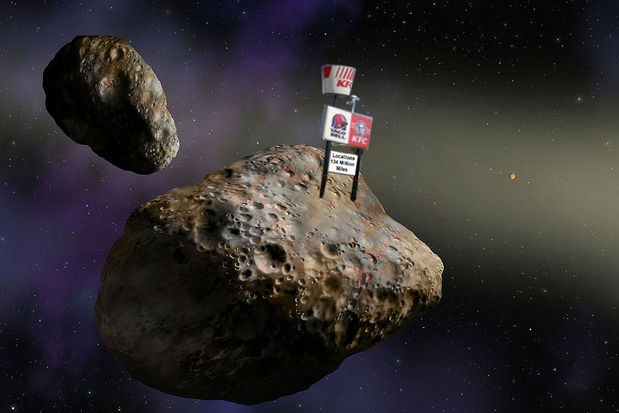 November 17, 2014 – In a historic achievement for the field of interplanetary advertisement, the North American Snack Agency (NASA) successfully launched a Taco Bell/KFC combo billboard, which touched down on an empty asteroid in the asteroid belt on Monday, and will remain there for the benefit of hungry spacefarers seeking tasty, affordable food on the go.

“This is a huge milestone for NASA,” explained lead snackology researcher Gwyneth Phunk. “Until today, billboard advertisement technology had been tethered to the surface of our planet, which has become rather overcrowded and tacky. Advertising on the sides of skyscrapers, giant 40-foot-high logos, and those airplane banner ads you see on the beach have all just been building to now, when you can look through a telescope at the beauty of our solar system, and see that KFC is open late and always fresh!”

The project, which received tax-free donations from Yum Brands, McDonald's Corp. and Starbucks Corp. totaling seven billion dollars, was constructed, launched, and landed over the course of six months. Similar projects are now in the works, as there is considerable ground to cover in the vacuum of space, and potential sales to passing sentient civilizations which may be lost forever.

“The problem with the Voyager's 'Golden Record' is that, while it would inform alien life of Earth's many languages and species, it's never sought to promote the delicious sustenance and incredible savings provided by America's most successful corporations,” Phunk said. “With the advent of asteroid advertising, or 'astertising,' we hope to entice hungry UFOs to visit our planet, and taste what American exceptionalism is all about.”

NASA's project schedule includes affixing billboards to 60% of the asteroid belt, as well as much of viewable Mars and Pluto, by 2035. Beyond that, they hope to piggyback on future endeavors by the European Space Agency and other space exploration groups by providing menus and brochures to be dispensed upon any habitable planets discovered outside our solar system.

“Some have suggested that the cost is too high, that the money could be used for terrestrial purposes, but they've just forgotten what makes America great,” said project leader Corbin Schilling. “We look up at the interstellar void with wonder, and we don't see empty space. We see signs with sexy ladies pointing you to the nearest gentleman's club, or Hardee's, that just haven't been erected yet.”

When asked how he'd be celebrating the successful landing, Schilling responded, “Probably at a nice restaurant with the rest of the team, and a big, juicy steak. This gig pays pretty well, so we haven't had to eat that fast food shit for months.”