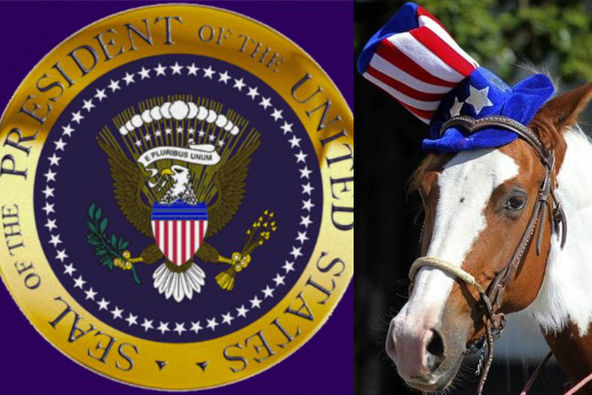 
June 9, 2015 - Becoming a household name after last Saturday’s historic win at the Belmont Stakes, claiming the first Triple Crown in 37 years, American Pharoah has surprisingly taken the lead in another race: the race for the GOP candidacy. Reuters polls show Pharoah at a 43% favorable rating, ahead of other favorites such as Rubio, Bush, Santorum and Cruz in an already overcrowded field.

Hours after his amazing win at Belmont, Pharoah announced his entry into the Republican field through his horse whisperer, Walter Davis. Pharoah stated, “I was born as a little foal with America in my heart. There are many issues under this current administration that I wish to address. Unemployment is still at a high and it does not seem like it is going to drop in the near future. Health care has been a disaster right from the starting gate, and is currently hurting the small business owners who Obama claimed would reap immense benefits.

“I don’t want to touch on social issues, as politics have begun to lean too far in that direction, just like Frosted leaned too much in one direction just hours ago as he was rounding the final turn, a move that cost him the race. However, there is one important social topic that I must touch upon, as it is dear to my American bred heart: euthanasia for poor performance in America needs to end.

“Vote American!” he concluded. “Help me cross the finish line as president of the United States of America!”

The Democrats, reeling and confused at the sudden news of Pharoah leading the GOP primary polls, have already started throwing out rumors of Pharoah’s questionable legitimacy. Hannah Engstrom, co-editor of the popular news site demsRus.com, reported on a hidden truth of Pharoah: “Pharoah’s owners claim he was born on a farm in the heartland of America to try to create a feel good story. But by looking through Pharoah's ancestry, we know of his actual Arabic background. His family lineage shows he is clearly a direct descendant of the colt that the infamous Egyptian pharaoh who Moses defeated rode. The spelling change to Pharoah is a cheap way to confuse the general population of this country. And naming him American is just a further method of hiding that he is in fact Muslim, a tricky move that Karl Rove must be behind.”

Pharoah’s ascension toward the Republican crown has even been welcoming news amongst the other Republican candidates. A source of a source who is friends with the mother of a questionable source said that Marc Segar, Junior, Junior Advisor to Jeb Bush said, “If Pharoah became the Republican nominee it would be amazing, as we all know a horse can beat a donkey in an electoral race any day of the year.”