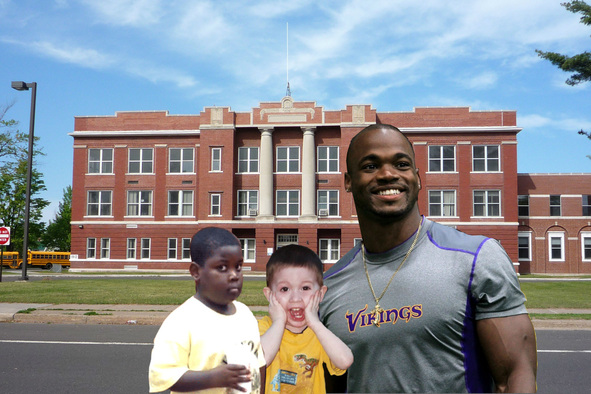 September 17, 2014 – A flurry of ethics scandals and investigations have beset players in the NFL, including a probe into Minnesota Vikings running back Adrian Peterson's alleged child abuse, which culminated in a team suspension late Tuesday night. Sparing no time to repair his public image, Peterson went public Wednesday morning with a personal project he's been eager to share with the world: The Adrian Peterson Toughen Up School for Sissy-Boys, a non-profit after-school program designed to prepare whiny or spoiled youth for the harsh, violent realities of life.

“This has been a passion project for me, both as a father and as a man,” the 217 lbs. professional athlete told reporters on the campus grounds, where bright-eyed young students shuffled nervously past the headmaster while looking at their feet. “The years before high school are the most formative for these kids, so what better time to teach them conflict resolution by asserting your physical size and willingness to inflict harm?”

The after-school curriculum of the Toughen Up School includes bodybuilding and competitive team sports, but really separates itself from other similar programs by incorporating a hazing style similar to many military schools and college fraternities. In addition to growth through physical torment, the kids are nurtured psychologically in wood shop, where Professor Peterson orders students to fetch a tree branch, and then sit patiently while he whittles it into a quality switch.

The schedule also includes a history course, during which Peterson relays to students the various ways his father treated him, as a means to justify the rest of the day's activities.

Peterson made a point to tell those listening at home that the program was not just designed for urban boys from the south, and that he heavily encouraged enrollment by East Coast suburban youth who, as he puts it, “have needed something like this for a long time.”

“If I'm being honest, a big part of my involvement will be for the sake of staying busy,” Peterson confessed. “There's only so much time you can spend with your family before they start instinctively recoiling in horror when you enter a room. If I'm going to keep my mind off of this suspension, I need to get my hands on some other people's kids, and mold them in my image.”

Peterson, not wishing to take all the credit, was quick to thank Radisson Hotels and Anheuser-Busch for their co-sponsorship of the school.