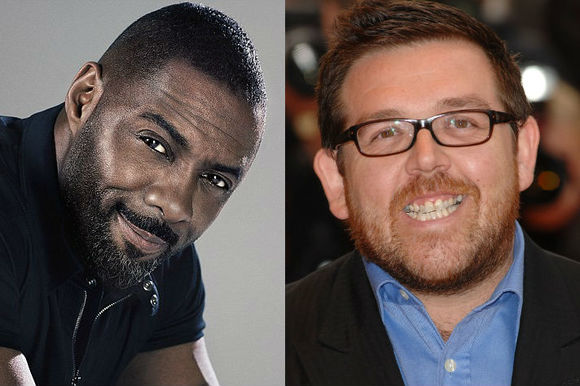 Photo (left) courtesy of James Dimmock
September 1, 2015 – Current James Bond series author Anthony Horowitz said in a Daily Mail interview that, while he feels that favored actor Idris Elba is not suave enough to portray the spy onscreen due to being “too street,” he is heavily in favor of beloved character actor Nick Frost, or a “Nick Frost type,” to take on the titular role of the brooding, debonair secret agent.

“I've been a fan of Frost ever since Shaun of the Dead,” said Horowitz. “He was captivating to audiences with his goofy smile and high-pitched voice. Can you say man-crush?

“He is the confident, cool performer I think could perfectly portray my 007, a man without weakness or doubts, just a tuxedo and a pocketful of clever quips. I knew it from the second he leaped his full body weight sideways into cover in Hot Fuzz. Nick is the one.”

Horowitz went on to clarify that he hadn't simply stopped at Frost when considering refined, good-looking talents to play Bond. Others among his personal favorites are Steve Coogan, Rowan Atkinson, Stephen Merchant, and of course Sacha Baron Cohen, who is known for disappearing into his roles. He just could not envision Elba as MI6's suave secret weapon.

“You must understand, when I see Nick in a role, I forget that it's him. He just blends in seamlessly with the script and his surroundings. When I'm watching Idris, whether he's portraying an American drug kingpin, an Asgardian god, or a South African revolutionary, there's something about him that just doesn't change. I can't quite put my finger on it, but it's always there.

“Please allow me to clarify my statement as well,” he continued. “To me, 'too street' doesn't mean 'too black.' Rather, it means too urban, or too rough, or yes, in a pinch, too black.”

“I would be honored to take on the role if it were offered,” Nick Frost told reporters in response to Horowitz's praise. “I think there's a lot I could bring to Bond that no actor has ever pulled off before. For example, what does James do to waste time between jobs? What are his favorite snacks? Does he have a much cooler friend he likes to follow around on adventures? These are questions I may have the answers to.”

No response yet from Horowitz to criticism that he might be “too meshugenah” to replace Ian Fleming.