﻿Tourist in Midtown Beginning to Wonder if CD is Actually Free﻿ 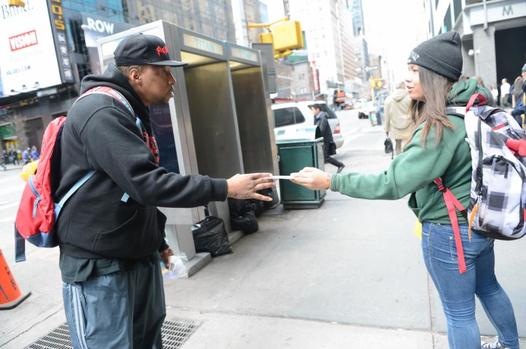 Photo by Susan Watts
May 27, 2014 - Marisa Taylor, an Australian tourist outside the M&M store in midtown Manhattan, having recently been offered a free compact disk containing amateur hip-hop music, is becoming increasingly suspicious that the man offering the CD may request some form of compensation. “He told me the CD was free and held it out for me like a strip club voucher,” said Taylor, fondly recalling the simple exchange 10 seconds prior. “But then he insisted on signing his name, which is something you only do to add potential value to an item. I just don't know... I feel like he's going to ask me for money if I try to walk away.” In the event of a monetary demand, expert projections place the odds of a successful transaction at around 10:1, dependent on the tourist's level of guilt, and her remaining disposable income after a week of city spending. While the situation has proven highly uncomfortable for Taylor, she confesses that the outcome can be “no worse than when I let Elmo hold my child.”