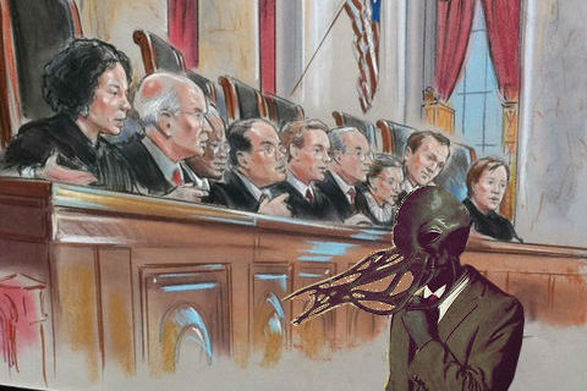 The Penney estate, devout cultists and owners of the multibillion-dollar chain of mid-range department stores, joined by CEO Mike Ullman, sued the government in 2012 when new federal employee protections made it illegal for them to hire virgin maidens for the sole purpose of spilling their blood on the Altar of the Cosmos, with the hope that such an offering will prolong the Great Old One's slumber in the sunken city of R'lyeh.

“We're not opposed to the practice of protecting and celebrating life set forth by your quaint, human Biblical standards,” said Ullman last week on Lou Dobbs Tonight. “But JCPenney is not that sort of company, for in his house at R'lyeh, dead Cthulhu waits dreaming. We see through the insignificance of your primitive ape society to the coming storm of insanity that is His rise.”

The case of Thurston v. JCPenney was decided 5-4, with the traditionally conservative justices forming the majority. Justice Kennedy, often the court's sole swing vote, was seen by reporters to be looking about warily and muttering to himself through much of the proceedings, as if hearing voices that weren't there.

“Our discomfort with the beliefs and practices of their faith must not supersede their religious freedoms,” Justice Scalia wrote in the majority ruling. “By upholding corporate rights, we protect the rights of the individuals who compose the corporation, at the mere cost of a bi-weekly ritual sacrifice of the still-beating heart of a nubile intern or receptionist.”

Employee rights advocates proved vocal both before and after the ruling came down, many accusing JCPenney of hiding their true intention: the warping of the cultists' minds through the hideous transgression of human sacrifice, bringing them more in line with the Dark Lord prior to his awakening.

“The majority's ruling sets a frightening precedent for our nation,” Justice Sotomayor wrote in the dissent. “Would the court extend to the Tcho-Tcho people of Chaugnar Faugn the freedom of cannibalism, or grant commitment-free zoning permits to the Chesuncook Witch Coven for erecting their subterranean shoggoth pits? This ruling opens the door to such atrocities.”

“JCPenney is a great place to work for those who respect our beliefs and fear the encroaching twilight of madness as we do,” Communications VP Kristin Hays said in an interview. “If that's too much for people, I understand that Sears operates as disciples of Hastur, Lord of Interstellar Spaces. Their sacrifice-free philosophies are probably more in line with government mandates.”

When asked to comment on JCPenney's victory, the lawyer for the plaintiff party said, “Ph'nglui mglw'nafh Cthulhu R'lyeh wgah'nagl fhtagn!” then vanished into another dimension.