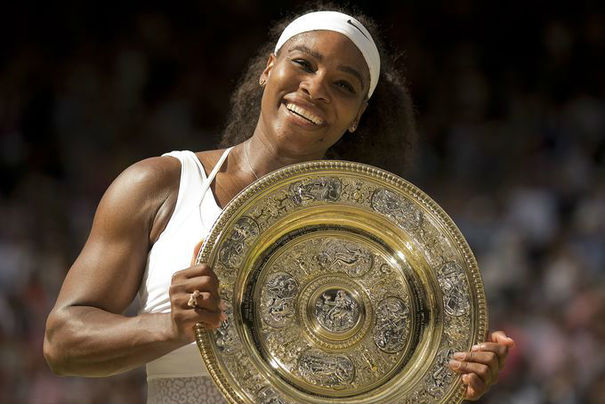 Image courtesy of Susan Mullane, USA TODAY
July 14, 2015 – Despite her win at Saturday's Wimbledon tennis tournament, the sixth of her career, as well as a host of other athletic and entrepreneurial achievements, Serena Williams' lifetime of success was condemned on Monday as being un-sexy, and therefore invalid.

Ms. Williams accomplished what analysts have called a “Serena Slam,” four consecutive major title wins in a row, and is poised to beat Steffi Graf's '88 record with a Grand Slam by winning the US Open, all of which would be considered impressive were it not for countless missed opportunities to enter the court wearing high heels and flash sexy eyes at the camera.

“There's so much that could have been done to make me look upon Serena's peerless career with awe, rather than contempt,” widely regarded sports douche Harold Shuggs told reporters. “She could have opted for a regular bra instead of a sports bra when doubling with her sister Venus. Or if she had even once licked one of her many trophies like an ice cream cone, I'm sure sports fans like me would be more comfortable referring to her as a real athlete.

“I mean, I know you have to be in top physical shape to compete at that level, I'm not saying she's not,” Shuggs continued, while balancing his remote control on his belly. “But seriously, what's with all the muscle tone? Look, when I inevitably fantasize about having sex with whatever woman is on the TV, I don't like to imagine that she could physically dominate me. That might sound weird, but I know I'm not alone here.

“And hey, while we're on the subject, her skin... nah, never mind,” he went on. “I was gonna say something else, but forget it.”

Experts in the realms of both sports and entertainment have found this to be a common impediment for accomplished females, though perhaps not as common as being considered too sexy to be taken seriously. Some analysts have gone so far to say that Maria Sharapova, the famed Russian Porsche model, might make an excellent tennis player if she ever quit her day job.

“We must not give up hope, and we must always support women's athletics,” said resigning FIFA head Sepp Blatter, who once said that female soccer players should wear tighter shorts for the sake of ratings. “I firmly believe that we can find a balance which would keep male fans tuned in, but without the risk of popping a mind-altering erection. With my last remaining months at FIFA, I vow to discover that balance myself.”

When asked if he happened to find success sexy, Shuggs responded that he didn't understand the question, before chugging a Miller Lite and scratching his nuts.